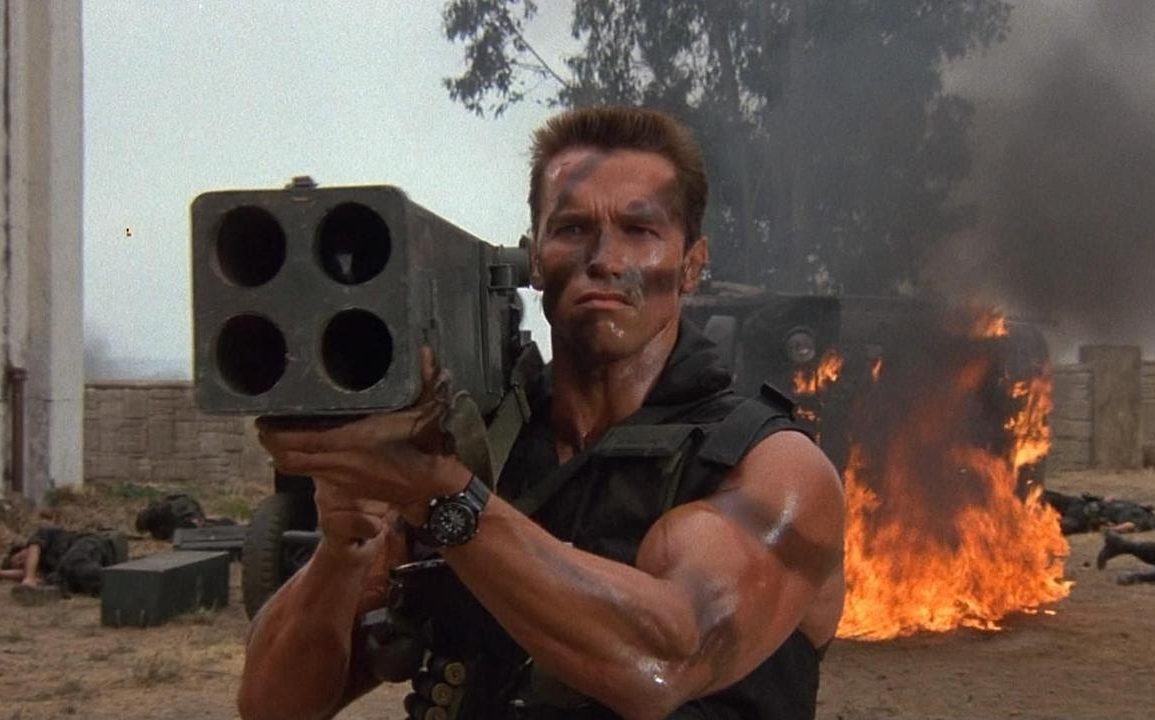 Commando can celebrate it’s 30th anniversary with pride as it still stands up as an action classic with plenty of humour, violence and memorable characters that will provide endless years of entertainment.

Plot: Retired Special Forces soldier John Matrix (Arnold Schwarzenegger) lives with daughter Jenny (Alyssa Milano) in isolation, but his privacy is disturbed by former commander Franklin Kirby (James Olson), who warns him that his fellow soldiers are getting killed one by one. After Kirby leaves, Jenny is kidnapped by former Latin American dictator Arius (Dan Hedaya), who wants Matrix to restore him to power. Instead, Matrix sets out to take down the rogue leader and rescue his daughter.

Blu-ray Review: I still find it hard to believe that Commando turns 30 this year so what better way to celebrate this action classic than reviewing the Blu-ray of the Director’s Cut?

For me this is a movie that’s essentially beyond criticism; everyone involved knew it was preposterous and over the top and that was entirely the point. One man can take on an entire army and walk away at the end with only a few cuts and bruises; rather than thinking “this is so silly” your’re cheering him on because it’s all pure wish fulfillment and fantasy.

This is still one of the all-time great One Man Army movies and after 30 years it remains as entertaining as ever. The action is spectacular and the final 20 minutes is everything you could want from a genre movie. Real explosions, blood squibs and in this extended version a lot more violence make this a must have.

Arnold is totally in his element as John Matrix and in one of the documentaries on this Blu-ray he talks about how the script appealed because he was a father looking for his child rather than him being a caveman or killer robot.

He has some of his most iconic one-liners in Commando including “Let off some steam, Bennett!” and “Remember when I said I’d kill you last? I lied!” so all the way through it you’ll be saying the dialogue as it remains one of the most quotable action pictures of all time.

Interestingly enough, in one of the documentaries co-writer Steven E. DeSouza talks about how some of it was inspired by his time in the military so he added some of that to the story.

Speaking of which, believe it or not Commando is a well written story and I noticed when watching earlier just how all the plot threads come together, like how they find out where Jenny is held and how they get there in the end so it all just works seamlessly.

The villains in this movie are some of the best the 80’s had to offer; you have Bill Duke who is just scary even if he’s playing a good guy and then of course there is Bennett played with relish by Vernon Wells.

In one of the behind the scenes pieces he describes Bennett as Freddie Mercury on steroids which is exactly what you’re thinking when watching it. Wells is hilariously over the top and clearly enjoying every moment as he taunts Matrix.

I’ve always loved watching David Patrick Kelly in anything and his weaselly turn as Sully is one of his finest hours; when he gets his comeuppance, you’ll be cheering in the aisles.

We also have Dan Hedaya as the head villain Arius who is responsible for Matrix’s current plight; he is basically a Bond villain and merely wants a world leader killed so he can take over.

I used to find Rae Dawn Chong’s character quite annoying but in this Director’s Cut there are a few more scenes between her and Matrix which flesh both characters out and it just flows much better.

He explains his predicament to her and how he missed so much of his daughter’s childhood because he was away on missions; we also find out what happened to Jenny’s mother which was something we’d never been told before. These scenes really add that bit more to the story and you understand more why Cindy (Chong) would agree to help this man.

The infamous Shed Scene (below) is a lot more brutal with Matrix cutting various inept goons to pieces with all kinds of weapons; it’s fantastically violent and probably ups the bodycount a little more too.

I will admit to not being a huge fan of James Horner’s score which is quite distracting in parts and would work better as holiday music at a beach. It was a strange choice but there are a few moments of awesomeness to be taken from it.

In terms of special features there are two documentaries which I’ve mentioned above with interviews with the cast and crew. These are incredibly entertaining and Rae Dawn Chong comes across as an absolute riot with her funny stories, especially when she mocks Bill Duke who unsurprisingly is meant to be very serious on set.

There are a couple of deleted scenes, most notably one between General Kirby and a cop as he explains who Matrix is and that they’d best stay out of his way until he gets his daughter back. It’s an interesting scene but it’s understandable why it was cut as it would have slowed the pacing down. The other is a slight change to the finale with soldiers yelling at Matrix to freeze but he ignores them because he is so badass.

There is a commentary from director Mark L. Lester too although sadly not one from Arnie which could have been cool.

There isn’t anything else in terms of special features but you do get the added bonus of the Theatrical Cut which I probably will never watch again as I’d feel like I was watching an edited version of the film.

It’s beautifully remastered with a pristine Blu-ray transfer so we get flawless audio and picture; just make sure you watch it on as big a screen as possible with the sound turned up to 11.

Overall, Commando can celebrate it’s 30th anniversary with pride as it still stands up as an action classic with plenty of humour, violence and memorable characters that will provide endless years of entertainment.