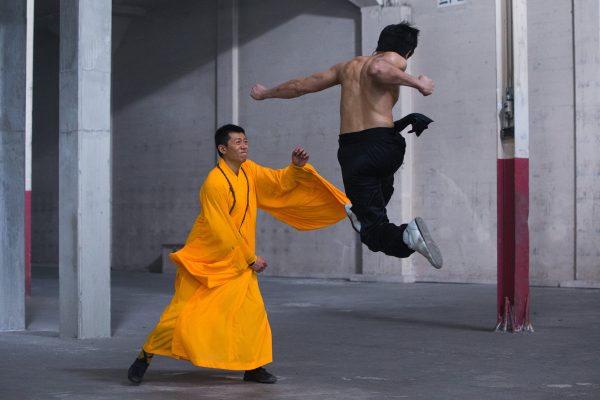 In 1965, martial arts icons Bruce Lee and Wong Jack Man had a private match away from the public that became legendary, even though neither man agreed upon the outcome. Director George Nolfi’s Birth of the Dragon is loosely inspired by that chapter of their history. Helping add another level of emotion to that historic match as well as the rest of the film’s narrative is the standout score by composers H. Scott Salinas (Allegiance, The Ivory Game) & Reza Safinia (The Trust, The Bounce Back).  Below they discuss their Birth of the Dragon score a little more in depth.

-What was the creative process like for Birth of the Dragon?

Scott: One word comes to mind – FRANTIC! We had about three weeks to score this from top to bottom.  And if you’ve seen the film or heard the score it was a massive undertaking and an extremely tall order.  Basically every single night for 3 weeks George Nolfi (the director) was at our studio from about 10 PM to 4 AM. Bruce’s theme was composed on the piano during one of those sessions.  Also Nolfi’s favorite cue in the film, track 19, called “Masters Make a Choice” was composed and fully produced in one of those sessions. George even played a bit of piano on it.  So what we lacked in time we made up for in a very tight collaboration where there just wasn’t time for second-guessing.

-How did you establish the sound of Birth of the Dragon?

Reza: As Scott just mentioned… QUICKLY! All joking aside we knew that we wanted Bruce to be represented by rock and roll and even if that meant the orchestra was playing it had to feel strong and visceral. In fact, Bruce’s theme is more of a power chord progression than a tune as he wasn’t fully developed yet as a fighter and (SPOILER ALERT) this film is about an awakening that Bruce has which leads to a major development in his style and his philosophy.  That’s why it’s “Birth of the Dragon” he starts out not fully the dragon and winds up there in the end.  Wong we wanted to feel ancient and wise and also he was a stranger in a strange land all the way from the Shaolin temple in China. So we used Chinese flutes, erhu, as well as western flutes and cello interchangeably to show his ethnic background but also portray him in the west.  His theme has a very clear melody and we hope successfully connotes his wisdom and ancient knowledge of Kung Fu.

Scott: Sorry to be boring but “Enter the Dragon” wins.  It’s also the very first one I ever saw as a kid so that might have something to do with it.

Reza: “Enter the Dragon” is tough to beat but I think “Fists of Fury” is a close runner up. It has some massive fight scenes that still stand the test of time.

-Did the film’s setting have any effect on the score?

Scott: It’s funny that you ask because the script itself mentioned post punk psychedelic music of the San Francisco area in the mid to late 60s.  And we absolutely did nothing like that, haha.  We allowed the songs to tell the period and we were more focused on setting up a sort of super hero origin story.  So I think the roots of the music are more based on that than the region or time period.

-You all used an orchestra for Birth of the Dragon. What are some of the benefits of recording with an orchestra? Where did you all record?

Scott: Orchestra is timeless.  It never goes out of style and it’s also the most forgiving ensemble. Everything sounds great with an orchestra.  We recorded in Bratislava, Slovakia. They have an amazing orchestra there that I’ve been visiting for 10 years so we have the system very dialed in.  Plus the culture and scene there is amazing and Vienna is a hop and a skip away. So if recording overseas it’s one of the favorites after London. For this film having orchestra juxtaposed with really aggressive rock sounds and then Chinese instruments really helped us add a dimension and gravitas to the film that you just can’t get any other way in my opinion.

–You both have scored documentaries before.  Are documentaries scored differently than scripted features? Is the approach the same?

Reza: The main difference stems from the fact that in documentaries you are constantly trying to remind people that this is real life.   You don’t want them to forget that what they are watching is real and if you overdo it then you run the risk that it doesn’t feel real anymore. Also often you want to provide an objective look at a topic and not necessarily reveal your personal opinion on the topic as a filmmaker there are often journalistic concerns that you have to take into account with the music.

In narrative you are trying to get the audience to suspend disbelief and believe temporarily that what they are seeing is real even though they are cognizant that it isn’t real.  Especially in a film like ours which is really a Kung Fu fable not a biopic, you have to really communicate to the audience that they are allowed to have fun and go on this journey with you.  So in narrative film especially a genre piece like this you have to be musically comfortable to really be expressive, bold, even bombastic at times, and hit them hard when it counts. Where as in many documentaries you are trying to find ways to subtly point out emotions or turning points without feeling too “Hollywood” and the challenge is how do you create intrigue without tipping the scales one way or another.

-Do you have a favorite film score?

Scott: “Catch Me if You Can” – John Williams. I know it’s a bit random but he melds jazz and classical music in such an interesting way in that score.  I think it’s his ode to Henry Mancini and the opening titles of the piece are just sensational. He has the orchestra making “shhh” sounds with their voices as a percussive effect.  It’s just so hip and crafty.  It’s like “darn it, why didn’t I think of that?”

Reza: “One Upon a Time in the West” – Ennio Morricone. That haunting harmonica, and sweeping vocals and orchestra as a kid just blew my mind.  If he was a painter his work would be made of primary colors – he’s so bold in his choices and his music is the kind that when you attempt to copy it you instantly get a caricature and fall short. You just have to take it in and absorb it but not try to emulate it musically.

You can purchase the film’s soundtrack on iTunes at https://itunes.apple.com/us/album/birth-of-the-dragon-original-motion-picture-soundtrack/id1275182482