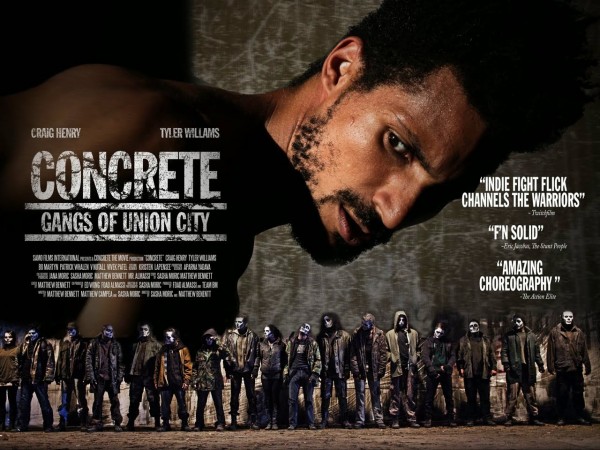 I expect great things from all involved as Concrete: Gangs of Union City has genuinely thrilling fight scenes with plenty of bone-crunching violence.

Plot: John ‘Concrete’ Hong has one night to fight his way across a violent city and rescue the one he loves. After eviction from their apartment, John and Bethany Hong are forced to live on the streets of Union, a violent city where street gangs control the lower blocks. When John journeys to the bottom of the city to find work, the WCC gang corners him. After fighting his way out, he becomes the target of the corrupt Police Chief and his hired assassin, Finger.

Review: I remember seeing the teaser trailer to Concrete over a year ago before a special screening of Tyler William’s short film All-In. Concrete immediately caught my interest with its moody visuals and exceptional choreography. As an independent Canadian feature, I was excited to see what the finished product would be like and I have to say that it has been worth the wait.

The movie has a nightmarish vibe which builds up a feeling of unease in the first half, with some neck-breaking martial scenes in the second half. Admittedly it does take a little while to get going though, but once the action kicks in, it doesn’t let up.

Craig Henry is our protagonist John ‘Concrete’ Hong and he has real screen presence and fighting skills to match. I also must commend his rather awesome hair, which I must admit I am rather jealous of. He doesn’t need to say much and does a lot of his talking with his fists, which I’m a big fan of.

Tyler Williams nearly steals the movie as the villain Fingers and he is clearly loving every second; his first scene involves some pretty nasty torture which is tough to watch but yet… I laughed anyway, because I’m a sick and twisted weirdo.

Williams is also a fight co-ordinator on the film and he should definitely be getting calls to work on some blockbusters soon. Fluid camera work and jaw-dropping fights are the order of the day and the climactic fight between Concrete and Fingers is the action highlight.

I loved the concept of the Horror Gangs, which as mentioned by other sites definitely channels The Warriors and Bronx Warriors. As Hong races across town to save his sister, he single-handedly takes on all of these incredibly creepy gangs and numerous inventive action scenes ensue.

It has a real 70’s vibe to it but also manages to feel very modern and reminded me of The Raid with its adrenaline-fuelled action.

The plot is pretty straight-forward and it doesn’t need to be overly complicated either; enough happens to Concrete that we are totally on his side and there are several incredibly bad ass moments. Another favourite scene is when he takes on an entire gang when they are about to assault a girl in a tunnel. It’s thoroughly satisfying one of the best fight scenes of the year, with a genuine feeling of chaos.

Overall, I don’t want to say anything else about the film as I don’t want to spoil it but I expect great things from all involved as Concrete: Gangs of Union City has genuinely thrilling fight scenes with plenty of bone-crunching violence.