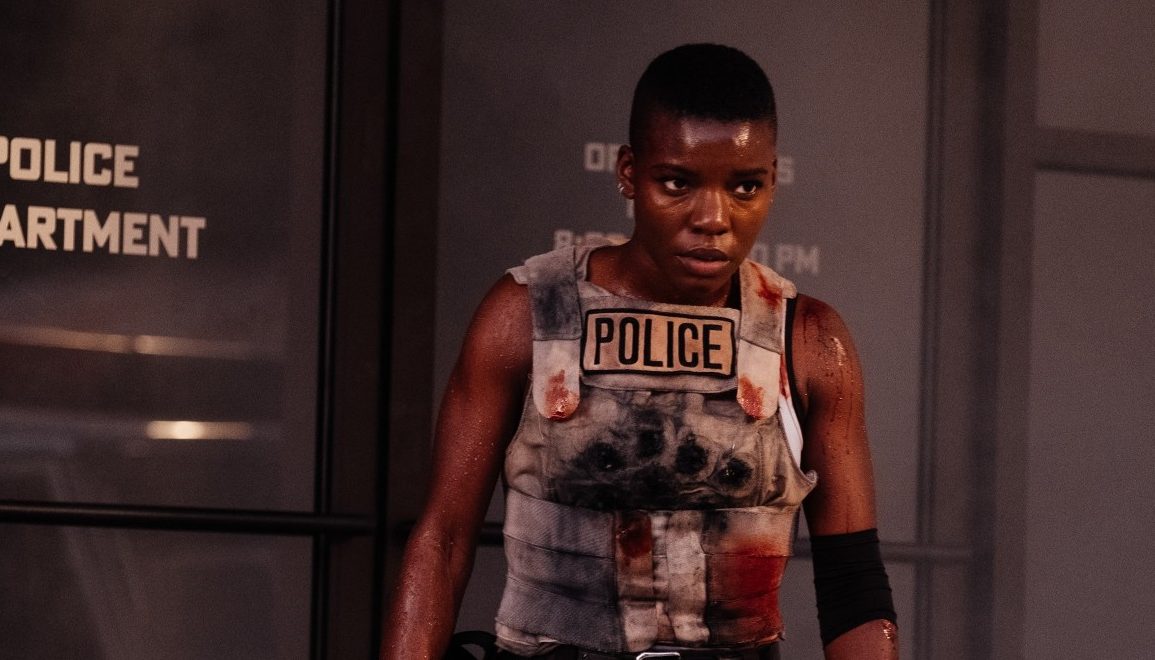 Copshop is a must-see for fans of movies like Assault on Precinct 13 with Grillo and Butler as charismatic as ever but both Alexis Louder and Toby Huss nearly stealing the show. The action is as bloody as you’d expect so this is an old fashioned adult oriented action thriller with a modern twist.

Plot: Screaming through the Nevada desert in a bullet-ridden Crown Vic, wily con artist Teddy Murretto (Frank Grillo) hatches a desperate plan to hide out from lethal hitman Bob Viddick (Gerard Butler): He sucker-punches rookie officer Valerie Young (Alexis Louder) to get himself arrested and locked up in a small-town police station. But jail can’t protect Murretto for long. Viddick schemes his own way into detention, biding his time in a nearby cell until he can complete his mission. When the arrival of a competing assassin (Toby Huss) ignites all-out mayhem, mounting threats force Viddick to get creative if he wants to finish the job and escape the explosive situation.

Review: Frank Grillo has recently stated how feels like his performance was cut down in Copshop, his latest collaboration with director Joe Carnahan; he needn’t worry as both he and the movie are everything you could want. Nothing is what it seems in this tale with double cross after double cross keeping you guessing throughout as to who the true villains are.

Copshop is a throwback to movies like Assault on Precinct 13 but with a side of glorious black humour and ultraviolence. I can always find something to enjoy in a Joe Carnahan movie and although this isn’t quite as crazed as Smokin’ Aces it’s pretty close and still manages to keep up the tension (even if there isn’t much action in the first half). It’s worth the build up as we get to know each of the characters and find out more about what is going on leading up to an explosive finale where we’re not sure who will get out alive.

Gerard Butler and Frank Grillo are two of my favourite actors working today and they have fantastic chemistry on screen. The true hero of this piece is the wonderful Alexis Louder as rookie cop Valerie Young who is the only character with morals and she wants to do the right thing; she is sympathetic yet tough and has real presence.

Respect must be given to the scene stealer Toby Huss as the psychotic killer Anthony Lamb who is scary yet utterly hilarious at the same time. The tone of this movie is truly bonkers at times not letting up on the hard R violence but it’s rarely disturbing as I just found it was done with humour. The action is visceral and the blood flows freely so genre fans should eat this up.

There were a few moments where I was literally crying with laughter especially one scene which involved some surgery which felt like it came out of a Tarantino movie; Chad Coleman has some of the best dialogue as the wonderfully foul mouthed and shouty police sergeant.

We get some great 70’s tunes (including the theme from Magnum Force in the opening!) and the score is playful yet dark at times just to add to the feeling of unease. The fact that this movie takes place in the desert in the middle of nowhere just adds to the desperation (and isolation) of it.

The script is sharp as a tack and this would benefit from multiple viewings just to make sure you pick up everything that is said as there is some rapidfire dialogue.

Overall, Copshop is a fun ride with the cast at their electrifying best and the violence plentiful; if you love those 70’s style action thrillers then you’ll have a ball here; If we do get a #CarnahanCut when it hits home video you can count me in.