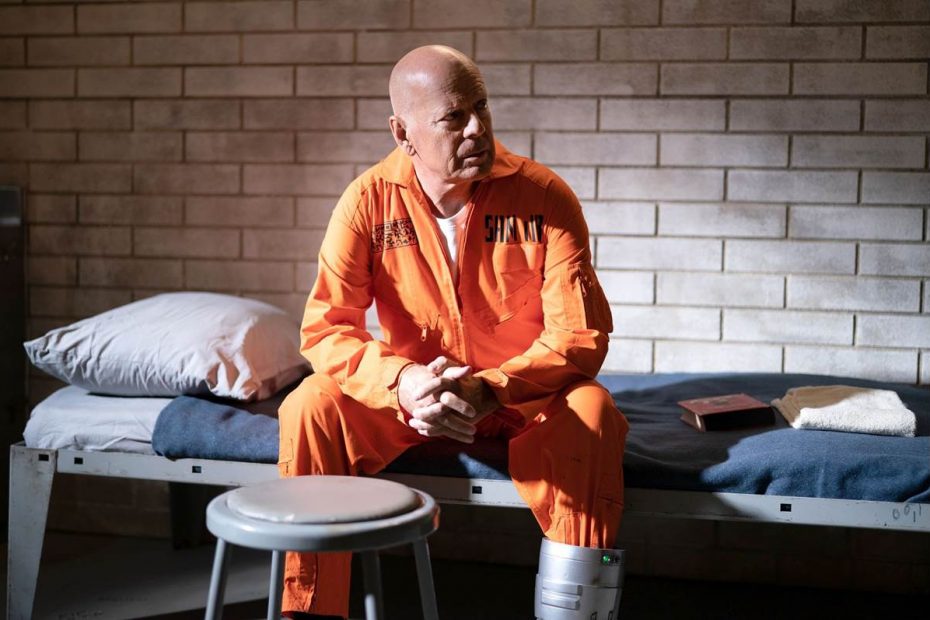 Corrective Measures is one of the more bizarre action pictures you’ll see this year but I consider that a plus as weird is always welcome for me; there are too many characters for us to care about anyone and the prosthetics are more distracting than anything but there’s enough R-rated violence and regular fight scenes to make this worth (maybe) checking out.

Plot: Tensions between inmates and staff heighten in the world’s most-dangerous maximum security penitentiary. Anarchy threatens to engulf the prison.

Review: Based on the graphic novel of the same name by Grant Chastain, Corrective Measures is one of the strangest films I’ve seen for some time but that isn’t necessarily a bad thing; it requires serious suspension of disbelief due to the crazy characters we see who are superpowered and for the most part utterly ridiculous looking.

It’s sort of like The Boys in terms of a dark superhero tale but not as well put together however, I’d be lying if I said I didn’t enjoy this movie for what it is. There are regular fight scenes that are nicely choreographed and some decent R-rated violence including (my personal favourite) exploding heads!

The characters are generally one note and the main protagonist Diego Diaz (Brennan Mejia) is sympathetic but rather bland not making much of an impression. Bruce Willis has a bigger role than expected as The Lobe and it’s one of his more bizarre characters he’s played but this is Michael Rooker’s movie who steals every scene. His scheming Overseer isn’t especially bright but he’s greedy and ambitious wanting to take The Lobe’s money so he can retire in luxury. Another highlight is Tom Cavanagh as Gordon AKA The Conductor who looks like he’s having a fun time but (spoiler alert) he is sadly killed off about midway through and it becomes less interesting without him.

The female security guard who is overly brutal deserved some comeuppance at the end which never comes and you can’t help but feel this is leaving things open for potential sequels which I’m not sure I’d be interested in. I would however, watch a potential spin-off featuring the character Payback who is essentially The Punisher and this film would have been far cooler if he was our main protagonist. I feel like there were too many characters here to develop any real connection to anyone so I never cared who lived or died.

Corrective Measures is certainly never boring but I think it would work better by keeping the superpower element but maybe without the unconvincing prosthetics as it’s more distracting than anything.

Overall, Corrective Measures is free on Tubi so at least you won’t waste any money watching it; if you tell me you hate it I’d totally get it as the sci-/fantasy element will put many off but I enjoyed it for the regular fight scenes and violence. If we got a spin-off just focusing on the character Payback I’d watch that in a heartbeat.