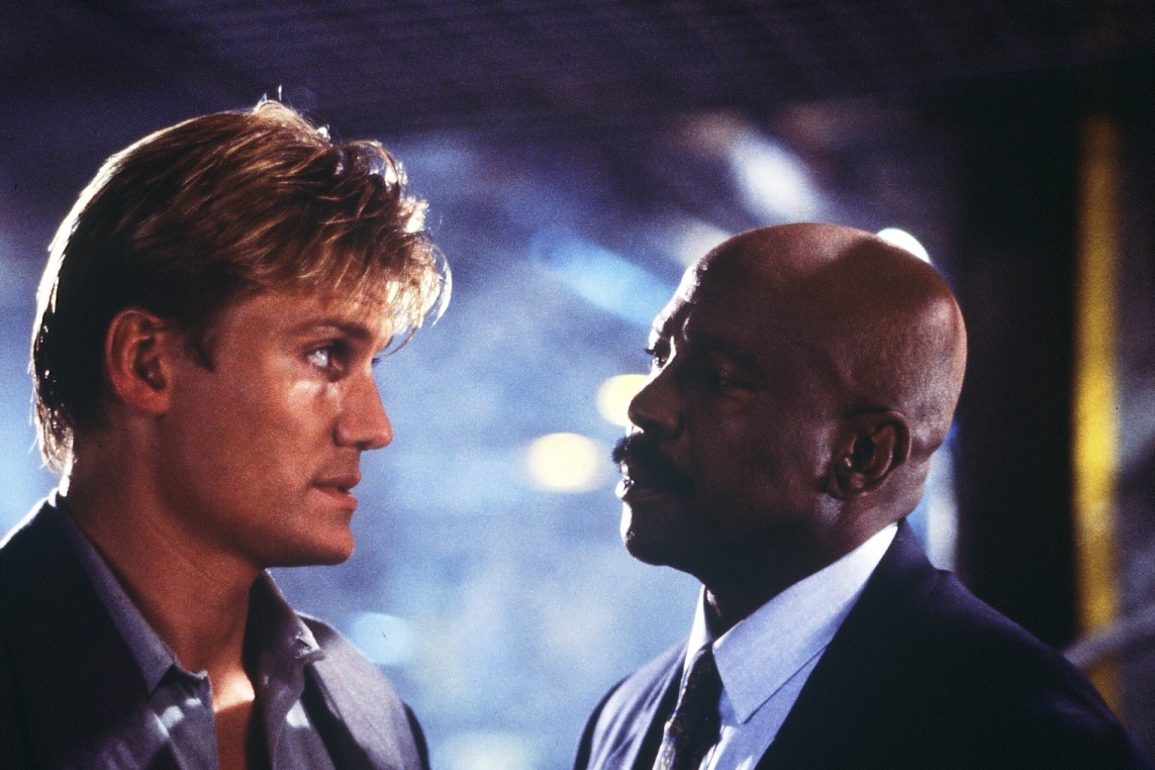 Cover-Up isn’t exactly action-packed but I did like the story which has a few surprises and there was enough action to keep me watching. It’s not one of Dolph’s best films but it has its moments.

Plot: Mike Anderson (Dolph Lundgren), a tough American reporter on a dangerous foreign assignment, finds his own life in jeopardy when he uncovers a deadly labyrinth of political intrigue that threatens the lives of thousands in the action thriller “Cover Up”.

Review: After working on the 1989 action movie The Punisher together Dolph Lundgren and Louis Gossett Jr. reunited for this forgettable but still entertaining conspiracy thriller. It obviously doesn’t have the bodycount of the Frank Castle killfest but Cover-Up does have an engaging story with some surprising twists.

It opens with an attack on a military base and Dolph Lundgren’s reporter Mike Anderson is sent to investigate the incident but soon discovers things are not what they seem; soon he is a target and he ends up fighting for his life.

It had been a good few years since I last watched Cover-Up and I had forgotten all about the surprises this movie had in it but it’s the story which kept me watching rather than just the action. If you’re looking for Dolph Lundgren having regular fight scenes and exploding heads galore, then you’ll be disappointed because this isn’t that kind of movie.

There are still a couple of beatdowns which are more desperate battles for survival than anything fancy as Mike is a reporter not a martial artist, so it isn’t overly choreographed. They manage to fit in that he is an ex-marine, so he is able to take care of himself when attacked. There are several explosions throughout, and the finale is suitably tense as Mike rushes to stop a bomb from killing thousands.

Of the big action stars of that era Dolph could always bring surprising empathy to his characters when he played the hero; *spoiler alert* Mike may not be perfect (who is after all?) but in the end he does what is right and saves many lives.

In an interesting side note I was reading on IMDb that the scene where Mike “runs through the mass of people during the Easter celebration, was shot during an actual enactment by pilgrims of the twelve stations of Christ. Hidden cameras were used to get the footage, and a pair of incognito Israeli National Squad paratroopers followed Lundgren for his protection. Nonetheless, pilgrims and tourists thought his fake blood was an actual wound, and “real” soldiers pointed M16 guns at Lundgren and got him down on the ground, as they had not been well informed of the film production”. You can kind of tell it was real as the reactions looked genuine which adds to the finale’s mounting tension.

The film ends very suddenly never getting sentimental and we don’t even know if Mike recovers from his wounds which looked like they could be potentially life threatening; let’s just hope he was ok…

Overall, Cover-Up may not be an adrenaline rush of action but it has its moments and the story itself kept me interested. Dolph is as appealing as ever and his scenes with Louis Gossett Jr. are entertaining if unspectacular making this worth at least a one time watch.