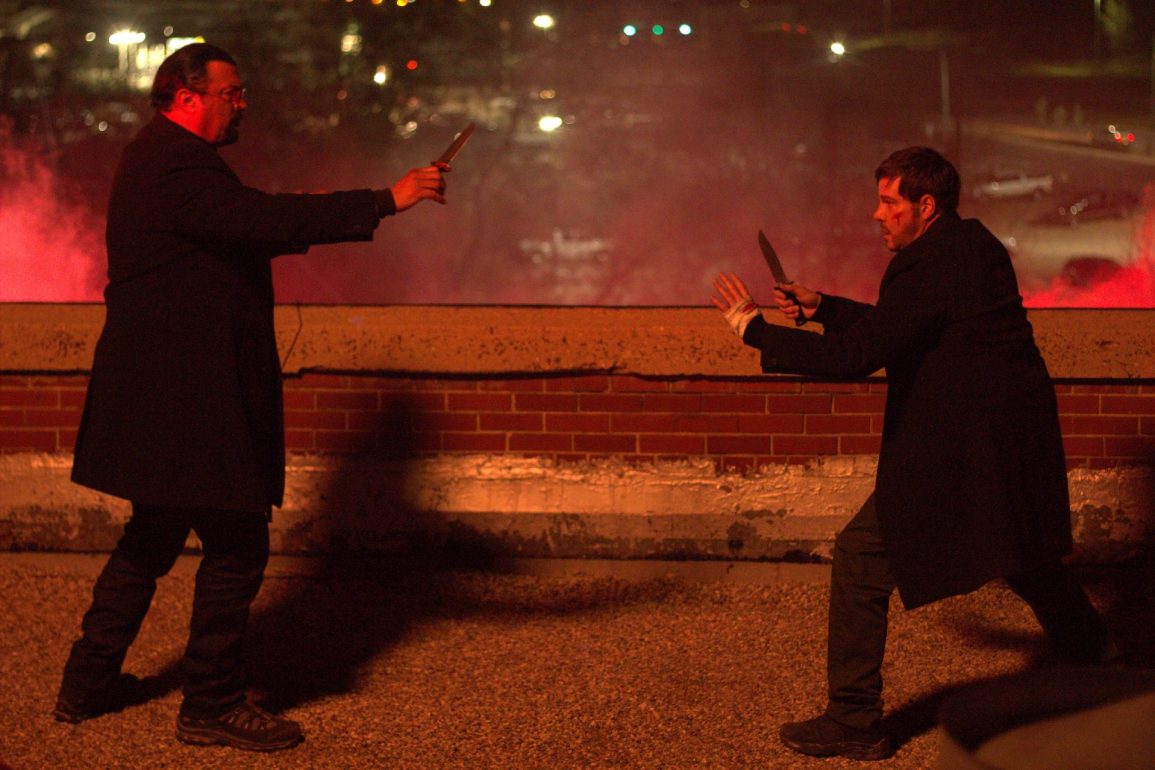 Craig Sheffer first came to my attention with movies like Some Kind of Wonderful and the Clive Barker adaptation Nightbreed where he played Aaron Boone / Cabal.

He has worked with Brad Pitt on A River Runs Through It and many more movies and TV shows throughout his career.

Now Craig stars alongside Steven Seagal in Code of Honor and chats with The Action Elite about the movie and what appealed to him about the story.

What was it that appealed to you about Code of Honor?

The script was actually really interesting and without giving too much away it kind of gave me a Fight Club feeling where you never know what’s going on and it’s very twisty and turny with really well written dialogue. Then when I spoke to the director he told me how he was going to shoot it and he pretty much turned this commercial movie where every 7 minutes you have some really great action scenes with Mr. Seagal and shot it as if it was an art film. So it’s got this gritty edge to it that really made it appealing to me; when people say that you aren’t sure if they really get it but he did and it really looks good. It really had that dark edge feel to it and I like all of that. When you do action films, especially independent ones, they don’t always come with a strong script. This was a very cool little script and you don’t really know what’s happening until the very end. I think it was very well handled by the director.

Would you say your character William Porter is a good guy or a bad guy?

I think when you look at what he does and you understand when you look back on it he is a good guy; he’s a tortured guy but when it comes down to it he makes choices that are in his mind helping other people. His motivation is to help other people, however if other people get in the way along the path of his mission then he’s willing to take them out too. So in that sense he’s a very grey character; he comes from a very extreme world. He comes from Special Forces and obviously saw a lot of killing and was a part of some secret missions so death becomes the norm. So within his personal psyche structure he is a good man but he is also coming from a path that is filled with a lot of darkness and duplicity.

Do you see any of your own personality in him or at least something that you can identify with in him?

I can certainly identify with the heroic and wanting to help people aspect; that’s always been a big part of my life. Helping the underdog is something I tapped into especially with him; I don’t think I would have quite so many dead people in the wake of that help but you never know (laughs). I’ve just never been in that dire of a circumstance. Let’s just hope I can find a better way…

You get to have a hand to hand fight towards the end of the movie; did you require any special training?

Once you’ve done as many movies as I have fighting kind of becomes second nature to me; actually Mr. Seagal showed me a few basic stances so I could look like I actually knew what was going on. He helped me with the fight scenes that we had; other than that you can tell me a fight scene in 20-30 moves and I can learn that in little over a minute. The older you get the harder the fight scenes are but it helped having Mr. Seagal around because he knows what he’s doing. He’s very helpful with me not making myself look ridiculous while I’m attempting to fight a man who has hands that are super-fast. They really are lightning fast; we did this scene where he knocked the gun out of my hands and I literally didn’t see his hands. I was like “can you do that again off camera so I can see it?” (laughs)

What was the toughest scene to prepare for?

I think that would be the last scene because I had double pink eye; it was pretty crazy because in the factory scene on the roof, I was struggling to get through it but other than that I don’t think there was anything that was particularly difficult in terms of acting. There was a scene with the girl which was done in kind of an emotional way but a lot of it was cut because it didn’t really fit the style of film. So whenever you’re working on emotional stuff, that’s always what you really want to get right and you prepare the most for. Action and verbal sequences are pretty simple for me; I always want to see who the character is and take it from there.

What was the atmosphere like on set? Was there room for improvisation?

Well we did mostly stick to the script but it didn’t always fit what was happening so there was a bit of improvisation and we only had Mr. Seagal for a certain amount of time. So some things that we had to rush through and get his take on we would turn around and then take mine later when he wasn’t there.  In those cases we would sometimes let it slide and do something with the lines where it was more off-handed and spontaneous. That was a lot of fun and most of the stuff with Steven was like that so we did a little bit of both.

There is potential for a sequel; would you be interested?

Absolutely, I had so much fun on that. I was very happy with that ending obviously and you end up being the “grey” hero and I certainly hope there is something like that as it was a lot of fun for me.

You have done soaps, drama, horror and action. Do you have a preferred genre?

I really like them all as long as it’s a good script; I’ve done every genre and if it’s a good script, it’s fun but if it’s not then it can be a lot of work to try and say lines that aren’t as well written (laughs). I like well written things but I like all genres. Acting is just a lot of fun for me and that’s what we get paid to do.

When you receive a script, what needs to jump off the page for you to be interested?

Well first of all, like this script, when you have a script where you don’t know what’s happening until the end and you’re guessing all the time that makes it a whole load of fun because I think most things aren’t like that. The originality of something is usually what jumps out; I’d say a lot of independents are a little more predictable and less original in terms of what you can see coming and what you can’t. I think that’s something I always look for is something original and different; I also like dialogue and character work. It’s fun for me to get into somebody else’s shoes and mind-set and see where that goes. I’m an instinctual actor, I’m not someone who sits around and plans how to do everything. Certainly when I do a take and something specific works in a way that I love it then I can use a version of that again and expound upon that emotionally. I basically like all the acting shmacting stuff (laughs). I’m still a theatre nerd when you get down to it.

How would you describe the director Michael Winnick’s directorial style?

To me he was very much an actor’s director because the only time he told me to do something was when he wanted me to do something different. It wasn’t like he was on top of me; we talked about the character a couple of days in advance and discussed where he was it. I think what was different is that he didn’t want my character to show a lot of emotion; normally my instinct as an actor is to show a lot of emotion but this is one where he would tell me to hold that side back because he’s an action hero. Not much fazes him and I really liked that; of course I also really liked his style of shooting as I thought that really made the film. He’s a helluva good guy and we actually are friends.

I’ve been out of town for a while; most of the time I‘ve been back East in Pennsylvania dealing with family health issues so I just got back two days ago and I’m preparing now to get out there and start working again.

Code of Honor is available now in Theaters & On Demand