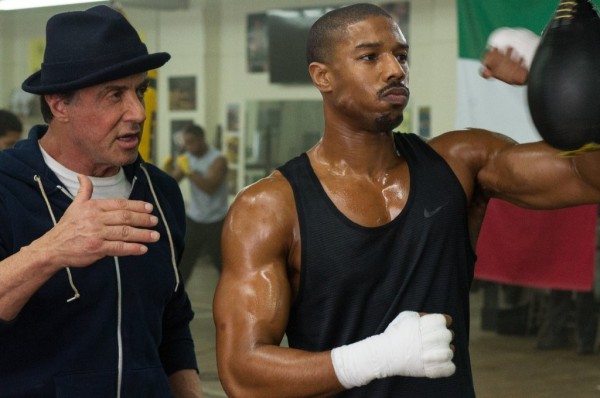 Creed is one of the most surprising, moving and entertaining movies in a long time and is essential stuff.

Plot: Adonis Johnson (Michael B. Jordan) never knew his famous father, boxing champion Apollo Creed, who died before Adonis was born. However, boxing is in his blood, so he seeks out Rocky Balboa (Sylvester Stallone) and asks the retired champ to be his trainer. Rocky sees much of Apollo in Adonis, and agrees to mentor him, even as he battles an opponent deadlier than any in the ring. With Rocky’s help, Adonis soon gets a title shot, but whether he has the true heart of a fighter remains to be seen.

Review: When I first heard about the concept of Creed I wasn’t quite convinced it was a good idea; for me Rocky Balboa was a fitting finale for the saga and another entry would feel forced and unnecessary. Good thing I was wrong though as I loved every second of this and it’s now my favourite movie of 2015.

It’s rare for me to feel anything when watching a movie these days; they are mostly soulless special effects driven blockbusters which are fun but disposable. Creed though is the most uplifting, thrilling and genuinely moving film I’ve seen in a long time and a must-see.

Before the film came out I heard people saying they weren’t fans of Michael B. Jordan but I imagine they will be converted after watching Creed. His performance as Adonis Johnson/Creed is layered and thoroughly effective. He always feels like he has something to prove and wants to show the world that he can make it on his own rather than through his father’s name. It all feels very real and everyone is going through their own personal battle in the movie which is what gives it its heart.

As good as Jordan is in the movie though, we all know he’s not the reason people will come to see Creed; we’re all there to see Stallone as Rocky Balboa and he doesn’t disappoint. There is early word that he could be nominated for an Oscar and I hope it’s true as it’s totally deserved. I think Rocky will be remembered as Stallone’s best character as he isn’t an invincible one man army but an underdog with problems we can all relate too.

Sly never gets any credit as an actor but I’ve always thought he was fantastic in the Rocky movies; he makes Balboa feel like one of us and he is one of the most likeable characters in cinema history.

In this he has his own personal fight and I believe Stallone has never been better; I won’t lie that there were a few moments throughout the film where the theatre must have been dusty and I got something in my eye because I certainly wasn’t crying. Shut up, you’re crying!

Anyway, in terms of story it feels very much like a Rocky film and totally belongs with the rest of the series; we get to hear some of the familiar music themes from the movies and by the end credits you’ll be ready to go to the gym and have an inspiring work out.

You’ll care about every character and the script is one of the best of the Rocky legacy. Like I said, there is real human drama which makes it all relatable; I suppose it is formulaic and doesn’t reinvent the boxing genre but with such soul and an uplifting story then it doesn’t need to.

The final fight in the ring also follows the usual boxing movie cliches which has more punches thrown than any fight in real life but it’s a movie so it needs a little embellishment.

Overall, I won’t say anything else and spoil the film but I think Creed is one of the most surprising, moving and entertaining movies in a long time and is essential stuff.