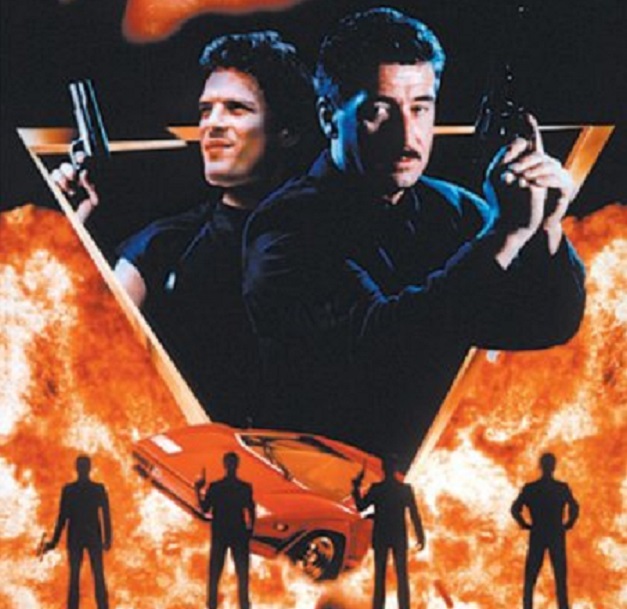 Crime Lords has some funny lines of dialogue and a light tone for the first half; Wayne Crawford and Martin Hewitt make for an entertaining pair and we get some low key action scenes but nothing to spectacular. I love how on the poster there is a Lamborghini coming through flames which never happens in the movie at all.

Plot: Elmo Lagrange (Wayne Crawford), is a grizzled veteran cop, who has always refused to polish the right people’s boots, and he’s paid the price. Now pushing forty, he’s still on the lowest rung of the police department. Now, to make matters worse, his new partner Peter Russo (Martin Hewitt) is a smug young cop who thinks the world owes him a living. When they both are assigned to what appears to be just another routine investigation, they stumble onto a huge, international car smuggling ring, an extraordinary operation between the U.S. and the Orient run by the ruthless Crime Lords out of Hong Kong.

Review: I remember watching Crime Lords many years ago but forgot it existed until recently; it’s a fun buddy cop movie that has its tongue panted firmly in its cheek for the most part not taking itself too seriously, but it gets much darker in the second half.

Wayne Crawford and Martin Hewitt have some decent one-liners and there’s just enough action to keep things moving however, some of the dialogue is a little jarring especially the racial slurs.

James Hong is a little underused and not especially threatening as the villain Ling but it’s Susan Byun who is the real antagonist, Jennifer Monahan. She is happy to use seduction or murder to get what she wants and makes for a hateful and cold-hearted nemesis for our two cops.

In terms of action we get some shoot-outs and explosions and it’s not short on bodycount either but its lower budget is obvious as there’s nothing that really stands out.

Overall, Crime Lords is disposable fun with some entertaining one-liners and enjoyable action scenes but it’s just not that memorable and doesn’t stand out against all the other buddy cop movies out there.