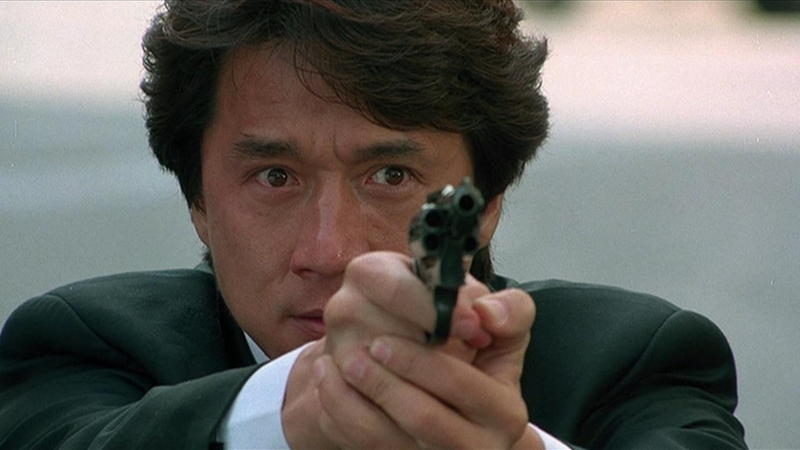 Plot: A Special Agent is assigned to protect a wealthy business magnate. However, when the businessman is kidnapped in a daring ambush, he teams up with a seasoned detective to crack the case. But soon he discovers the case isn’t that simple.

Review: Crime Story is one of my all-time favourite Jackie Chan movies where he goes for a more hard-edged action drama rather than his comedic approach.

I like when Chan does more serious fare and he’s great in these kinds of roles but that doesn’t mean the action doesn’t deliver the goods. We still get fight scenes, explosions and chases which to this day are jaw dropping. There was a frenetic feeling to the Hong Kong action pictures back then where it seems like people were genuinely injured as they fall down stairs and through furniture making every action scene look incredible.

The legendary Kent Cheng excels as corrupt Detective Hung Ting-Bong who is the brains behind the kidnapping of rich businessman Wong. It’s the kind of character we’ve seen before but we can still understand his motivations after doing the job for years as a police officer and having nothing to show for it; he’s still a hateful character but he does find redemption before the end.

The music is filled with electric guitar which as you all know if my favourite kind of action movie music and it works well for this tale.

In a piece of rather shocking trivia I was reading on IMDB that “Jet Li was originally considered for the role of Eddie Chan. While this movie was still in pre-production, his agent Jim Choy was gunned down by the Triads. The incident caused Li to opt out of making a movie about organized crime, as he was afraid of attracting the wrong attention, so he chose to do Tai-Chi Master (1993) instead.”

Earlier drafts of the script apparently were even darker with Chan being emotionally damaged, in a relationship with his therapist, and having considerable self-doubt.

Overall, Crime Story is one of Jackie Chan’s finest hours with a more serious tone than we’re used to which keeps the film dramatic and exciting with hard hitting action especially in the opening 20 minutes.