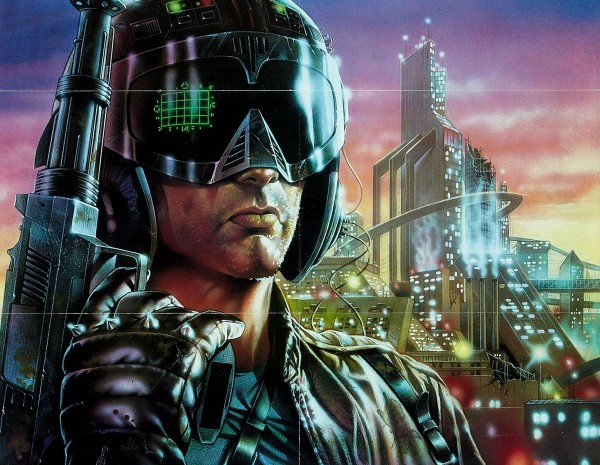 Crime Zone is an intriguing time-filler and Sherilyn Fenn steals the movie as the strong-willed, yet likeable heroine Helen. It’s just a shame the pacing is rather dull and lacks any memorable action.

Plot: Two young rebels live in a world where crime is eliminated in the post nuclear fascist world of tomorrow, until they team up as Bonnie and Clyde-style outlaws and go on a crime spree.

Review: David Carradine, Sherilyn Fenn and Peter Nelson star in this post-apocalyptic sci-fi movie from 1989. I love these types of 80’s movies where they clearly don’t have a big budget but by simply setting the entire movie at night they can get away with quite a lot. Like the synopsis says, it’s very much a sci-fi equivalent of Bonnie & Clyde… just not as good.

The best thing about it is Sherilyn Fenn who plays Helen; during the 80’s so many female characters were just there to be captured and rescued by the hero. In this movie, however she’s pretty badass and is never a helpless victim. In fact, it’s more Bone (Nelson) who is egged on by her sheer desperation to escape from their miserable lives.

Sadly, the film is actually rather dull with little tension and a pace that really drags in the first half. The action is a couple of small-scale shoot-outs and it’s only really in the last 15 minutes when things get interesting, especially the quietly devastating finale.

David Carradine doesn’t have a massive role but as he is one of the producers then he probably starred in it to give a bit of star power.  You never really get to see him do that much so we don’t get to hate or like him… he’s just there and shows up to say a few lines and smoke a cigar. The film really lacks a big villain and it’s more the oppressive society in general that’s the real bad guy.

I always enjoy Michael Shaner because few people do batshit crazy like he could; he plays Bone’s bitter ex-friend Creon who turns against him when Bone tries to leave without him.

I haven’t seen him in much for a few years but he was always the go-to bad guy in movies like Open Fire and The Expert. He actually could have been the perfect Joker a few years back too…

There are some interesting ideas in the story but it really is like a million other films we’ve seen before and since.

Overall, Crime Zone is an intriguing time-filler and Sherilyn Fenn steals the movie as the strong-willed, yet likeable heroine Helen. It’s just a shame the pacing is rather dull and lacks any memorable action.