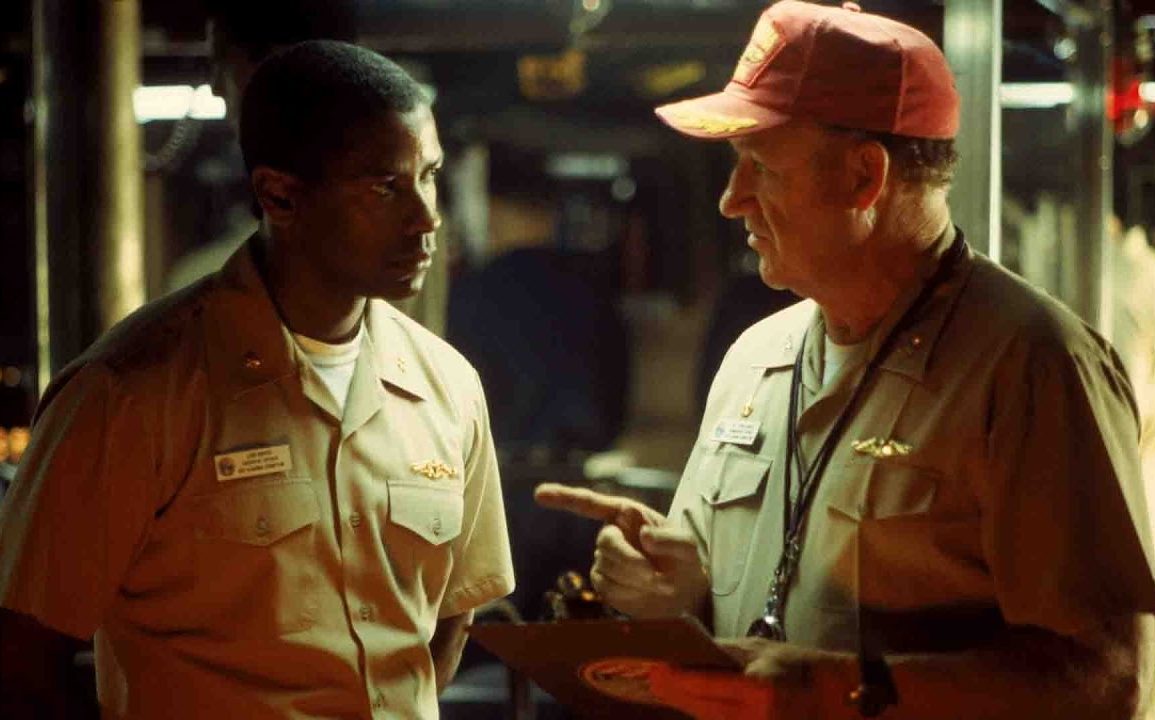 Crimson Tide is a master class in filmmaking and expertly builds tension right up to the satisfying (and sweaty) finale.

Plot: On a US nuclear missile sub, a young first officer (Denzel Washington) stages a mutiny to prevent his trigger happy captain (Gene Hackman) from launching his missiles before confirming his orders to do so.

Review: Crimson Tide is arguably Tony Scott’s best film; it’s an exercise in prolonged tension and I always need to change my shirt after watching it.

Gene Hackman is one of the greatest actors of all time, which is a stone cold fact! He can say so much with a single glower where no dialogue is required and I never want to be on the receiving end of it. He can be so terrifying in a movie even when he’s being funny. I miss seeing him on screen and really wish he’d come back to do just one more role.

Denzel is on career best form as Hunter, the new Executive Officer who is forced into making constantly difficult decisions and this is where the genius of the writing comes through.

In the first half of the movie you are on Captain Ramsay’s side; after all, he’s the Captain and he’s been doing this shit for over 30 years; he doesn’t need some wet behind the ears newbie telling him what to do. You can understand the Captain’s frustration that Hunter is constantly questioning every order and his lack of experience really shows through.

As the story progresses, we find out that the Captain would really rather just blow those Ruskies to Hell and will not question the orders, even when a half received communication comes through. It’s from this point on that you begin to see Hunter’s side of things and you understand his motivation.

Things take a turn for the worse when the crew begins to double cross each other and it all goes pear shaped. When you look at the supporting cast now, you see a lot of very familiar faces and realise that it’s one of the best movie casts of all time: Viggo Mortensen, Ryan Phillipe, James Gandolfini and Rocky Carroll (NCIS) to name a few.

The writing in Crimson Tide is phenomenal; each character has their own motivations and with so many twists and turns it’s an exhausting watch. Apparently Tarantino had a hand in some of the writing and you can tell exactly which scenes they are (the ones with all the pop culture references). One of my favourite lines is “We’re here to preserve Democracy, not to practice it” and “speaking of horses…”. It just has the right amount of humour which makes you smile but never denigrates the tension.

Tony Scott’s direction proves why he is a legend and will be missed for many years. The use of colours strangely adds to the intensity and the bright reds almost make it look like each character is going through their own personal Hell.

The story is so well put together that within minutes the claustrophobia sets in and doesn’t let up until the end credits.

The best thing about the film is Hans Zimmer’s score which not only has a great main theme but one of the best movie scores of all time. The main theme starts off quietly and builds into a crescendo that still gives me chills after 20 years (yes, it’s THAT old).

Overall, Crimson Tide is a master class in filmmaking and expertly builds tension right up to the satisfying (and sweaty) finale.