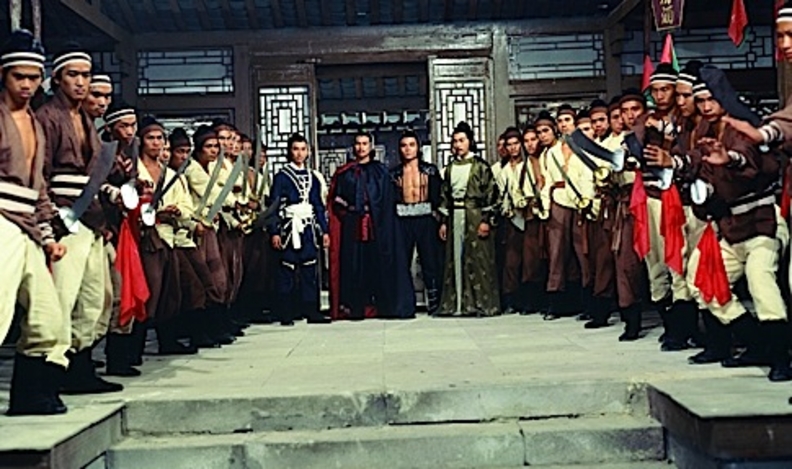 Crippled Avengers is one of the best kung fu movies you’ll ever see with jaw dropping fight scenes, memorable characters and a scene stealing villain.

Plot: After the death of his wife, warlord Dao Tian-du (Kuan Tai Chen) turns evil and holds a town in thrall to his reign of fear with the help of his sadistic son (Feng Lu). Four of the villain’s crippled victims — a blind man (Kuo Chui), an amputee (Chien Sun), a deaf-mute (Meng Lo) and an insane fighter (Sheng Chiang) — seek the help of a wise kung fu master as they train to eliminate the tyrant for good.

Review: This is one of my all-time favourite kung fu movies; while surfing Netflix the other day I thought I’d give it another watch as I hadn’t seen it for many ears. It’s been beautifully remastered and is in the original language too so no lame dubbing to ruin things. I used to find this movie pretty disturbing when I was younger as the opening scene with Dao Tian-du’s wife and son being dismembered was quite shocking.

Watching it now doesn’t quite have the same impact as it does look quite fake but it remains one Hell of an opening scene and sets the tone for the rest of the movie.

It’s one of the Shaw Brothers finest hours with some truly spectacular martial arts sequences and choreography that boggles the mind. The characters are all memorable and you are rooting for our crippled heroes all the way through. Sheng Chiang’s transformation from warrior to an “idiot” was well done and quite tragic too.

The way way the fighters communicate despite their disabilities is very cleverly done and is a fine example of teamwork and overcoming adversity.

Dao Tian-du is a hateful bastard and despite feeling sorry for him during the opening scene, that quickly changes as he becomes a complete monster along with his deranged son.

The hoop fight at the end is one of the best martial arts scenes I’ve ever watched and my back hurt just watching it.

It’s very well paced with fight scenes every few minutes; it thankfully doesn’t waste time with silly things like romantic sub-plots. This is all about the kung fu and to this day remains one of the most influential martial arts movies; The Man with the Iron Fists movies are clearly homages although pale in comparison to this classic.

Overall, Crippled Avengers is one of the best kung fu movies you’ll ever see with jaw dropping fight scenes, memorable characters and a scene stealing villain.