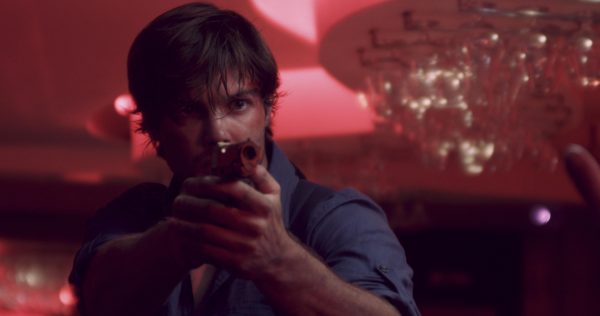 Crossing Point is hugely entertaining with a fast pace and a likable hero in Shawn Lock; it would have been cooler to have more Luke Goss but if you’re looking for how to make a low budget actioner then this should be your template.

Plot: A young American couple in love, Michael (Shawn Lock) and Olivia (María Gabriela de Faría) vacation in Baja, but things take a frightening turn when Olivia is kidnapped by a drug dealer, who demands that Michael smuggle a backpack full of cocaine-stolen from a rival cartel-over the border into the U.S. within twelve hours or else Olivia will be killed. A Tijuana Cop is on the trail, as Michael navigates the treacherous underworld of Mexico, and he himself becomes a force to be reckoned with…

Review: If ever there’s a false piece of advertising it’s having Luke Goss front and centre on the DVD cover of this movie as he literally only has two scenes, so if you’re expecting a Goss film then you might be disappointed. I must say though that that is the only thing I found disappointing about this taut action thriller. I love anything set in Mexico and with a rumoured budget of approximately $300,000 Crossing Point is the perfect example of how to do an indie actioner right.

The story kicks off immediately and doesn’t really let up until the end; our hero Michael (Shawn Lock) is immediately sympathetic and what happens to him is your worst nightmare come true when travelling abroad. As he frantically searches for his girlfriend we find out she has been kidnapped and Michael is forced to transport drugs for a cartel or else she dies. A simple but effective premise that will keep you on the edge of your seat for the majority of the movie.

I like my action straightforward and Crossing Point doesn’t have anything spectacular like buildings exploding; there are however, a few shoot outs and chases but it’s the tension that keeps you gripped. The bad guys are believably nasty and Tom Sizemore is always entertaining; he was particularly scary in this too which helped to create this nearly hopeless situation that Michael is in.

The performances in general are decent and I still can’t believe the movie looks as slick as it does with such a low budget; it just goes to show there is a different between low budget and cheap looking movies.

Overall, Crossing Point is hugely entertaining with a fast pace and a likable hero in Shawn Lock; it would have been cooler to have more Luke Goss but if you’re looking for how to make a low budget actioner then this should be your template.