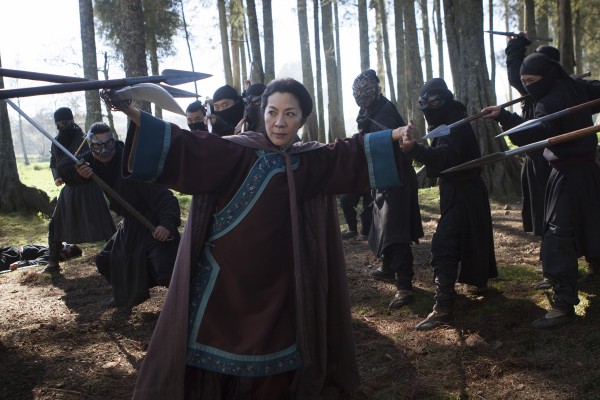 Sword of Destiny lacks the epic scale and depth of the original but it does at least move along quickly and has plenty of martial arts scenes.

Plot: Crouching Tiger, Hidden Dragon: Sword of Destiny tells an epic story of lost love, young love, a legendary sword and one last opportunity at redemption, set against breathtaking action in an epic martial arts battle between good and evil that will decide the fate of the Martial World.

Review: The original Crouching Tiger, Hidden Dragon remains a classic of the Wuxia genre and although I’ve never been a fan of wirework fight scenes, there was always a great beauty to the action in Ang Lee’s movie. The treetop scenes are stunning to behold and the movie had more characterization and depth than you’d maybe expect from a martial arts movie or martial arthouse as I call it.

So now we come to the sequel which has just been released on Netflix with Michelle Yeoh returning and Donnie Yen joining the action. Early word on the movie has been mixed and it’s easy to see why; this belated sequel looks strangely cheap compared to the first movie and bares little resemblance to it in terms of tone or epic scale.

Judging it on its own merits though, it’s not a terrible movie but I think it will not stand the test of time well. There are CGI backgrounds which are noticeable (although not too bad) but the wirework is also quite shoddy which is a shame considering the movie is directed by Yuen Woo Ping.

Like I say in every review involving wirework, when people are doing fight moves which are physically impossible for humans to do, it takes you out of the action. There also isn’t anything particularly memorable in terms of action aside from a fight on the ice with Donnie Yen.

One of the complaints from China is that this movie feels “Westernized” and the movie being filmed in English feels like pandering to people too lazy to read subtitles and I know what they mean. There is also more humour and a bit of a lighter tone which gives the movie a different feel and the story lacks any real depth.

It is at least well paced and Donnie Yen/Michelle Yeoh are always magnetic when they are on screen; I also liked the supporting cast and Juju Chan really stood out as Silver Dart Shi.

It’s great to see the underrated Jason Scott Lee as the main villain (the awesomely named) Hades Dai; he doesn’t really do much and is given little to work with but he has presence on screen and it disappoints me that he never became a huge star after Dragon: The Bruce Lee Story.

The music score maintains the main theme from the original movie but aside from that doesn’t come up with anything exciting or new.

Overall, Sword of Destiny lacks the epic scale and depth of the original but it does at least move along quickly and has plenty of martial arts scenes. I do feel that they waited too long between movies which makes you wonder why they bothered at all…