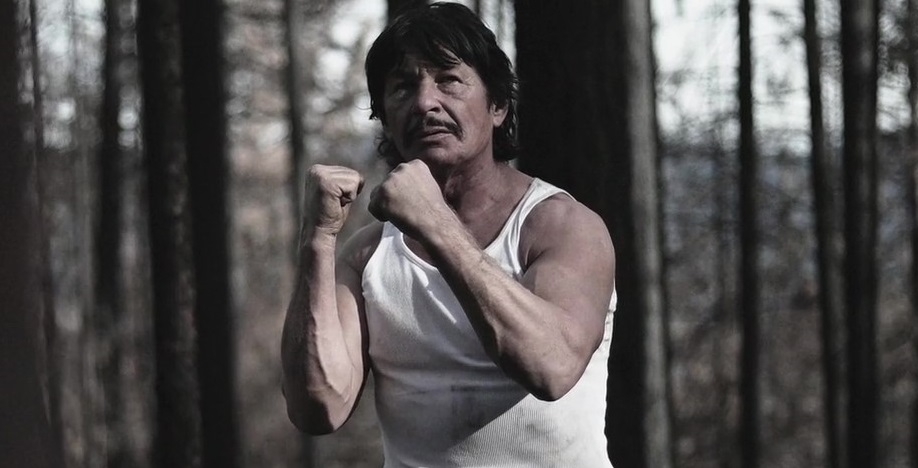 Cry Havoc is hardly high art but if you’re a fan of Bronzi and enjoy graphic violence and nudity then you might have a good time.

Plot: An ambitious young reporter is granted an interview with one of the FBI’s most wanted. While entering his compound she finds one of his prized possessions, a serial killer who murders at call, called HAVOC. Her only hope is a rogue police man searching for his daughter.

If you have seen other Rene Perez films then you have a pretty good idea what to expect and if you’re not a fan than this likely won’t win you over but I can honestly say this is one of his better movies; there is no CG blood this time giving us buckets of bloodshed and some imaginative and (and vomit inducing) kills. At one point someone gets their jaw and head torn off and the camera refuses to flinch… so best not have dinner while watching.

There is also lots of nudity which is always a plus and then we have the killer himself Havoc played with menace by J.D. Angstadt who also starred as Havoc in Playing with Dolls, Playing with Dolls: Bloodlust and Playing with Dolls: Havoc which I admittedly have never seen. Havoc is definitely reminiscent of Leatherface on crack in terms of how he looks and at one point even uses a chainsaw to devastating effect.

Richard Tyson (Death Kiss/Kindergarten Cop) plays the creepy Voyeur who keeps Havoc in his compound and films him killing various actresses who thought they were coming for an audition so he is really the mastermind behind it all.

I have always been a fan of trashy exploitation movies with graphic nudity and violence so Cry Havoc is definitely my kind of film. It’s schlocky stuff and makes no apologies for it and you may be wondering why I’m covering it here when it is clearly more of a horror movie. Well there actually is action in it and that’s where Bronzi comes in. As usual he says about 3 lines which mostly constitutes “have you seen this girl?” as he searches for his daughter while trying to avoid Havoc. I also noticed that he never actually saves anyone… at all.

You’d maybe think the fact that he’s playing a cop that he’d try to help the various women he comes across but most of them end up dead all while he asks if they’ve seen that girl. “Please save me!” “Shut up silly girl and tell me if you’ve seen this other girl who I may or may not save!”

There is very little to him as a character and I’m pretty sure he’s dubbed over by someone else as his vocals sound slightly different from everyone else in the movie. Still, it’s fun to watch him engage in a few shoot-outs and a climactic fistfight with Havoc… which sort of just ends in an unsatisfying way.

It’s very much open for a sequel as like any slasher flick the killer isn’t dead at the end but as I mentioned above it just ends too abruptly and left me feeling a bit flat.

Overall, Cry Havoc is gory trip into Hell with a mixture of horror and action and fans of Bronzi will enjoy watching him throwdown with the killer and taking out the trash. There isn’t much to it but if you’re a gorehound like myself then you’ll find something to enjoy.