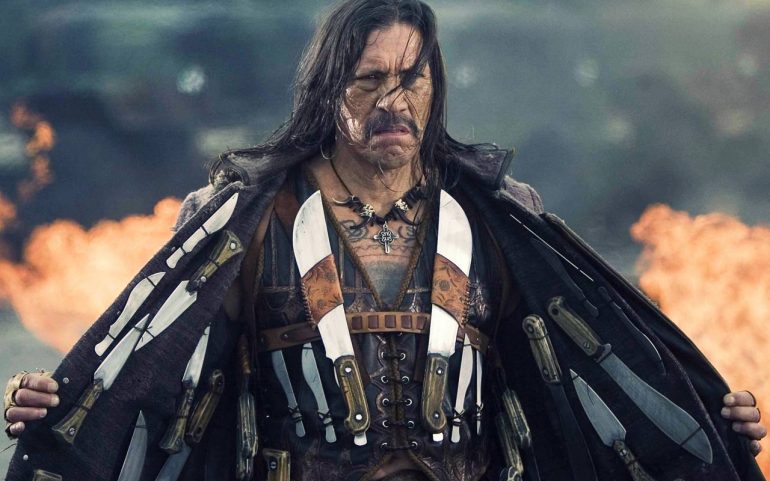 He may not text but Machete does do interviews, so Danny Trejo kindly stopped by recently to chat with The Action Elite.

EOIN: Machete Kills hits theatres in September, what kind of action can we expect from it?

DANNY: *Laughs* You know what? Machete 2 makes Machete look like a nursery rhyme. I don’t want to give too much away but me and Jessica Alba kill about 25 people in the first 3 minutes of the movie. That’s the intro.

EOIN: There’s also Sofia Vergara with those rather interesting guns…

EOIN: I’m intrigued by the casting of Lady Gaga; how did she get involved in the project?

DANNY: Actually there’s a tattoo place here in Hollywood called Shamrock Tattoos, a lot of celebrities go there, Mark Mahoney is the tattooer and one of the best in the world. He was tattooing my back; I have a portrait of my 3 children, Jesus Christ and Venice Beach all over my back. He was tattooing my back and I went there to finish up and I said “Hey Mark, I’m gonna do Machete 2” and Lady Gaga was also in the Tattoo Parlour and she said “Hey, I would LOVE to be involved in that!”

Right away I called Robert Rodriguez from the Tattoo shop and I said “Robert! Lady Gaga said she wants to be involved in Machete 2.” Robert said he’d get in touch with her people. So then when I got to Austin, Texas all Robert said was “WE GOT GAGA!” So that became a little joke with me and Robert.

EOIN: Aside from the family side of things, what is that makes you and Robert Rodriguez work so well together?

DANNY: Me and Robert have the kind of relationship where even on the set and he’s directing me, he just looks at me and I kinda know what he wants. We have this thing where we both love what we’re doing so we have a passion for this. So he wouldn’t do anything if I didn’t wanna do it and I wouldn’t do something if he didn’t wanna do it, you know? We just really clicked and I think it shows on screen.

EOIN: Very much so. On the last Machete you got to beat up Steven Seagal which is a rare thing.

DANNY: I actually know Steven and have been in a few movies with him. In fact I was the first person to ever kill him on screen. I was talking to him and he said “damn, I wish there something for me in Machete” so I said I’d call Robert and I said that Steven wants to know if he can do Machete and Robert said “Yeah, let’s find something for him” so Robert made him the main bad guy.

EOIN: And this time you’ve got Mel Gibson…

DANNY: He is one of America’s esteemed actors; it’s funny because I’ve got a swordfight with him in this movie so when Robert yelled “Action!” I threw my sword down. Robert would ask what’s wrong and I’d say “I’m not going to fight William Wallace, are you kidding me?” Even Mel laughed.

EOIN: What direction, can we expect the series to go in? Is Machete Kills Again already written and will Machete ever go into space?

DANNY: Oh we’re doing it, Robert just keeps coming up with ideas and then he puts them all together so if I call him and say I have an idea then he’ll say “OK, that’ll be cool”. It’s like how “Machete Don’t Text” came about; I was looking for Robert at Comic Con and kept calling him and calling him but he wouldn’t answer his phone. So when I saw him I said “Robert, why don’t you answer your phone? I’ve been trying to get a hold of you!” He said “Danny I’m swamped, man. Just text me!” and I just said “Machete don’t text” so we ended up putting that in the movie. Now every time I pull out my phone someone will say “Machete don’t text!”

EOIN: Now, you’ve also got another movie coming up called Vengeance, which is a gritty 70’s style vigilante flick.

There’s also a Western coming out in September called Dead in Tombstone with Mickey Rourke; I wanna be an iconic cowboy. In this movie Mickey’s going to be unebelievable; I got to work with this horse with a Frisson, I guess it’s from Holland and it’s a beautiful breed of long haired horse.

Oh wait, I nearly forgot to tell you I am also doing The Muppets! We filmed that in England directed byJames Bobin. It’s me, Ray Liotta and Tina Fey and it is FUNNY!

EOIN: I loved the last movie so I’m looking forward to this.

DANNY: Oh man, you actually get to see Ray Liotta and Danny Trejo singing and dancing!

Robert Rodriguez also has a new TV Network called El Rey and it’s going to have a TV series of From Dusk Till Dawn, so be sure to check that out.

EOIN: There’s actually been something I’ve been wanting to ask you since I first saw the movie back in 1999. In Desert Heat, the movie where you starred with Jean-Claude Van Damme and your character is called Johnny Six Toes; I’ve often wondered is he a ghost or a guardian angel?

DANNY: I always thought more of a guardian angel or a ghost really and I ended up helping him. He’s a nice guy actually Jean-Claude Van Damme, he kinda fell by the wayside and I haven’t seen anything by him for a while though. But he was a really nice guy though. That was actually the place that was so hot, I went out on the motorcycle for two hours and I ended up getting dehydrated, emergency hospital the next day and all that stuff.

EOIN: Even watching the movie you could tell it looked really hot.

DANNY: Oh it was unbelievable. We were shooting a scene and this tortoise started walking across the set so I went to pick him up and this ranger almost shot me! He said we can’t touch him.  We had to move the set we were using because we couldn’t move the tortoise cos it’s an endangered species. We couldn’t pick him up and move him! It’s like that little tortoise was like “Yeah, that’s right!”

EOIN: Con Air is literally one of my favourite movies, what is it like to work on?

DANNY: Con Air was a huge test of testosterone of any movie I’ve ever been in. You have all of these big Hollywood guys on the movie. If somebody would spit, then somebody else would spit further and then it would become a spitting contest. And then if you did a push up, somebody else would do more. I mean it was so fun; it was ridiculous watching all these guys playing all these games. Me and Nicolas Cage were just laughing because everybody wanted to be top dog.

EOIN: It’s very much a comedy, there’s so much humour in it.

DANNY: Oh yeah, it’s like Machete in that way. The first movie was actually a comedy, I mean it was funny! I took my mom to see it who is now passed away and she laughed and thought it was the funniest movie she’d ever seen. I mean I chopped 3 guy’s heads off, which is gruesome but the way their heads bounce on the floor was funny.

EOIN: I especially liked you using the guy’s intestines as rope to jump out of the hospital.

DANNY: My mom laughed too, she just loved that movie. It was funny because when I had the scene with the two naked girls in the lake, I didn’t really want her to see that. It’s  my mom, y’know? Robert and the guys laughed their asses off though: “Hollywood tough guy gets shot by mom!”

EOIN: Speaking of Hollywood tough guys, would you ever be interested in a role in The Expendables series?

DANNY: Well I don’t use steroids, I have a natural build which I think is pretty good but I don’t really get cast with all the big muscle guys that use steroids. So they try to stay away from me *laughs*.

EOIN: Thanks so much for sharing your thoughts with The Action Elite and all the best with Machete Kills.

DANNY: Thank you so much.