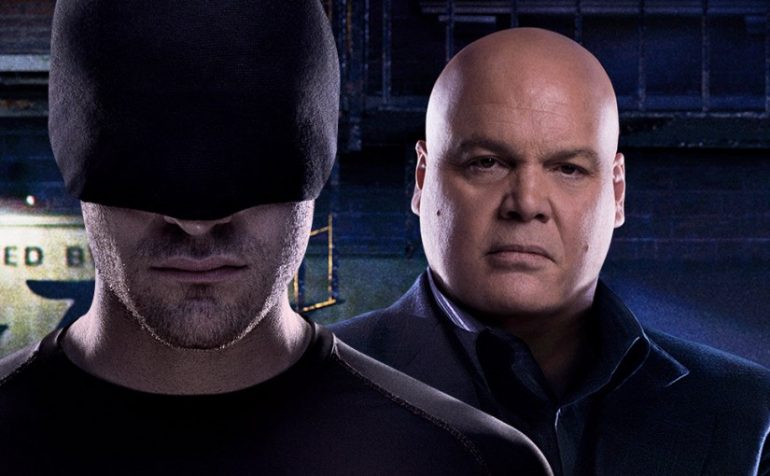 Daredevil is a triumph for Marvel and Netflix giving us a dark and gritty superhero show with some stunning action and a career best performance from Vincent D’Onofrio. Essential!

Plot: The first in a planned series of shows detailing the Marvel universe, “Daredevil” follows Matt Murdock, attorney by day and vigilante by night. Blinded in an accident as a child, Murdock uses his heightened senses as Daredevil to fight crime on the streets of New York after the sun goes down. While Murdock’s day job requires him to believe in the criminal justice system, his alter ego does not follow suit, leading him to take the law into his own hands to protect his Hell’s Kitchen neighborhood and the surrounding communities.

Review: I remember when the Daredevil movie came out in 2003 it was generally reviled by everyone but I always thought it was a lot of fun and had a nice dark edge to it, especially the director’s cut which I stand by is an entertaining flick.

When I heard that Netflix were giving it a revamp I was intrigued what kind of angle they would go for. The movie was dark but was let down by Colin Farrell’s hamming it up as Bullseye (and some unconvincing special effects) but this new series goes even darker with Matt Murdock now played by Charlie Cox who is immediately appealing as the lawyer turned vigilante. He is suitably badass during the fight scenes but brings real empathy to Matt Murdock who has his own inner demons which he is always fighting including his Catholic faith.

Karen Paige (Deborah Ann Woll) and Foggy Nelson (Elden Henson) are both very sympathetic as Matt’s friends who will eventually come to realize that all may not be what it seems with Matt’s extra-curricular activities.

Vincent D’Onofrio is the real revelation in this series however, with his interpretation of Wilson Fisk AKA The Kingpin utterly terrifying and he just oozes menace any time he is on screen. It’s episode 4 when we see just how vicious he is as he slams someone’s head with a car door until they are dead leaving you sitting there saying “holy shit!”

The violence in Daredevil feels far more realistic (and almost Scorsese-esque) than what we are used to seeing from Marvel with no CG and the fight scenes come off as truly stunning; a one take hallway fight is destined to become a classic.

This series does require patience as the first few episodes are a little slow and it’s really not until episode 4 when things really kick into gear but I thought it set up all the characters nicely and you really get to care about Matt, Foggy and Karen.

I’m not sure how I feel about the Daredevil final suit as personally I thought Ben Affleck’s was spot on in the movie but I guess this new one is more tactical and dare I say it, believable.  I’m sure it will get upgrades as the series progresses and I also hope we get to see these characters join the MCU in the future as Daredevil is one of my favourite Marvel characters alongside Frank Castle.

Overall, despite the odd pacing issue Daredevil season 1 is the best thing Marvel has done for quite some time and is very much geared towards a more adult audience than their movies. So if you’re looking some graphic violence and incredible fight scenes look no further.