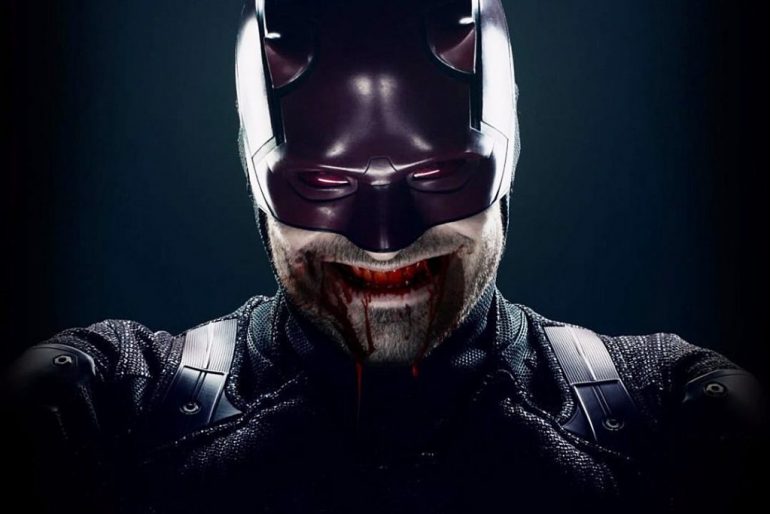 Daredevil: Season 3 is another triumph with great character arcs, plenty of action and it finally has an even pace so it’s never dull making it essential viewing. We’ll miss you, Matty…

Plot: The third season of the American web television series Daredevil, which is based on the Marvel Comics character of the same name, follows Matt Murdock / Daredevil, a blind lawyer-by-day who fights crime at night. When Wilson Fisk is released from prison, Murdock must decide between hiding from the world or embracing his life as a hero vigilante.

Review: Now that I am up to date with The Defenders I finished Daredevil Season 3 last night and once again I think it is the best series on Netflix and it’s a damn shame it won’t be back for Season 4.

Unlike many of the other seasons of Netflix shows I found Season 3 of Daredevil arguably the best paced yet and it felt like all the characters came into their own. We really delve into Karen’s backstory and she remains my favourite female character on the MCU… although has anyone ever noticed how she is always crying? Like… all the time? Still, she remains very appealing and feels like one of the most believable characters on the entire show. Foggy has also become a shithot big time attorney working for a large law firm so he has done well for himself since things went South between him and Matt in Season 2.

We start off this season with Matt in a church bed being nursed by a nun after his desperate escape from the exploding building at the end of Defenders. He is questioning his faith and who he is and whether he has been wasting his time as Daredevil. The Nurse (played by Joanne Whalley) is wonderfully sardonic and quickly gets the size of Matt and tries to bring him back from the brink of total despair.

When Wilson Fisk ends up making a deal with the FBI he is released from prison and gets to stay in a swanky penthouse in exchange for him giving up various crime syndicates around the city. Matt knows that Fisk isn’t out for the good of humanity so he goes after him to take him down once and for all.

The most interesting newcomer to this season is FBI agent Ben Poindexter but before I go any further I really want to go into some major spoilers so if you haven’t watched season 3 yet then best look away now.

OK are they gone? Then I’ll continue. As we all know Poindexter is an alias used by Daredevil adversary Bullseye; we can tell early on that Poindexter (or Dex as he is known) has a bit of a screw loose and has psychotic tendencies. This season is essentially his fall from grace as an FBI agent as he embraces his darker side and ends up working for Fisk taking on the mantle of Daredevil and committing crimes under his name so the city will turn against him. What’s interesting is that both Dex and Matt have had similar childhoods and they have a lot in common however, they are also total opposites. Where Matt works for the greater good Dex is just a psycho who kills for fun.

FBI Agent Nadeem is another great addition and he is a true blue hero who has fallen on hard times financially after his daughter got sick; he still wants to do the right thing but ends up being forced to work for Fisk.

Daredevil has always had the best action scenes of the Marvel Netflix Universe and arguably the most innovative fights of all the live action MCU. The highlight of this season is Matt’s desperate escape from a prison which was apparently done in one take and it is truly stunning; having it all in one take adds to just how exhausting it looks and really captures how hard fighting is. Having been in 1 or 2 fisticuffs in my time I can tell you it gets tiring really fast and you get that from this amazing sequence.

There are multiple excellent fight scenes though with Daredevil fighting Dex in the church feeling unbelievably intense and every fight scene is a genuine battle for survival. Matt has never had to fight so hard against someone who is equally as skilled (or even better) than him so any scene between the Daredevils is heart-stopping stuff.

Vincent D’Onofrio is mesmerizing as Wilson Fisk and this is my favourite role he has ever played. He brings such menace to the character where he can simply twitch his face in such a way that he is utterly terrifying. He finally gets to don the iconic white suit too and is even known as The Kingpin so he has become the ultimate criminal mastermind with the entire city within his grasp.

There are several surprising twists in the story which I didn’t see coming and some shocks which came out of left field. It isn’t as graphically violent as the first two seasons (boo) but still has plenty of brutal beatdowns.

I’ve always loved the music to this series and Season 3 may be my favourite music score of any of the Daredevil seasons thus far with some choral cues and dark booming themes for the villains.

There may be the odd episode which could have been trimmed for time but I was never bored with this season finding myself on the edge of my seat throughout.

Overall, Season 3 of Daredevil may lack the intensity of Season 2 and I did miss Frank Castle but as a continuation of the story and the personal journeys of all the characters it really wraps everything up well. Seeing Vincent D’Onofrio don the Kingpin suit is a genuine highlight as well as the epic prison fight. Now I’m going to try and finish Jessica Jones…