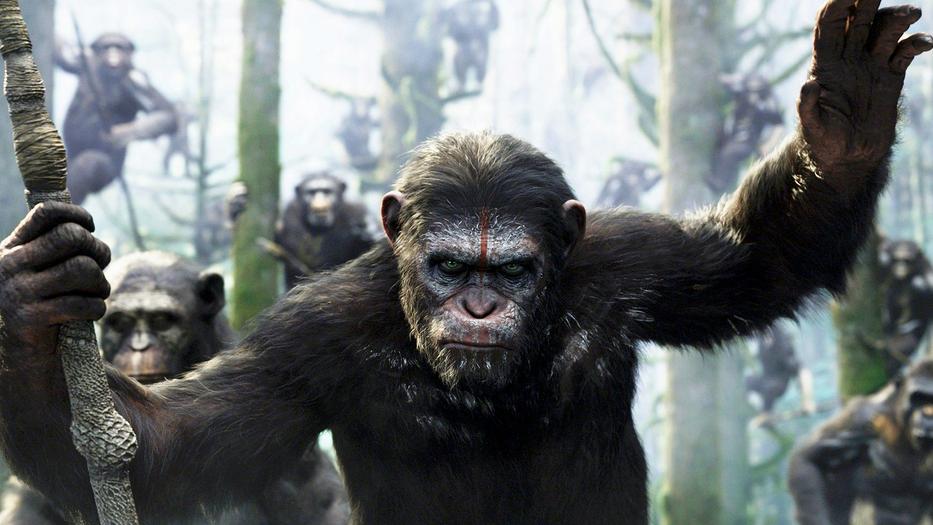 The Apes continue to rise in this excellent sequel; it has heart and action making it an essential watch.

Plot: A growing nation of genetically evolved apes led by Caesar is threatened by a band of human survivors of the devastating virus unleashed a decade earlier. They reach a fragile peace, but it proves short-lived, as both sides are brought to the brink of a war that will determine who will emerge as Earth’s dominant species.

Admittedly that’s not saying much as this is one of the worst years for movies since I was born, but still Dawn was an outstanding movie which grabs you from the start and doesn’t let go. There is an air of tension from the very opening with mistrust between the apes and what’s left of the humans.

It’s brilliantly written as it makes us believe the film is going in one direction and then it blind-sides us by doing something unexpected.

Andy Serkis really is the master of motion capture making Caesar utterly believable and the real genius here is the eyes; so much emotion is conveyed through the eyes of the apes which makes the concept work so well.

The voice work also makes them seem more believable too as they speak in broken English and don’t sound human. The CG is probably the best I’ve seen and it’s one of the rare times I was genuinely stunned by how good it was.

Remember Koba, the evil looking ape from the first movie who had been tested on? Well, he has a far bigger role in this and let’s face it, we always knew he was going to turn out nasty. He begins to question Caesar and it is him who actually starts the war, which was a really nice twist. We are led to believe that it’s going to be the humans that start it but when it ends up being the apes, you just know it’s going go pear shaped very quickly. The climactic battle between Caesar and Koba is one of the best fight scenes of the year too and the fact that you genuinely care about the outcome just demonstrates how well made this film really is.

The first half is mostly character building with tensions between ape and man growing ever more. Jason Clarke is the human lead Malcolm and is very sympathetic; he’s a man who has basically lost everything since the Simian Flu outbreak and just wants to protect his son from the horrors of the world. From the trailers I was expecting Gary Oldman to be a psychotic villain but he wasn’t at all; everyone had their reasons for doing what they do and nobody is black or white. There is a scene with Oldman breaking down in grief over the loss of his family and it just proves that he really is one of the best actors of all time; an utterly stellar performance.

The final 40 minutes has the war beginning and it’s really worth the build up; the action is incredible with the apes riding in on horses and the initial assault on the human compound is breathtaking stuff. There are explosions galore and you even get to see Koba riding on horseback with two machine guns.

The music score is suitably epic too with a few nice choral moments and plenty of bombast during the action sequences.

Overall, if you’re looking for the best blockbuster of the summer then Dawn of the Planet of the Apes is the one to beat; moving, thrilling and original. Bring on the next one!