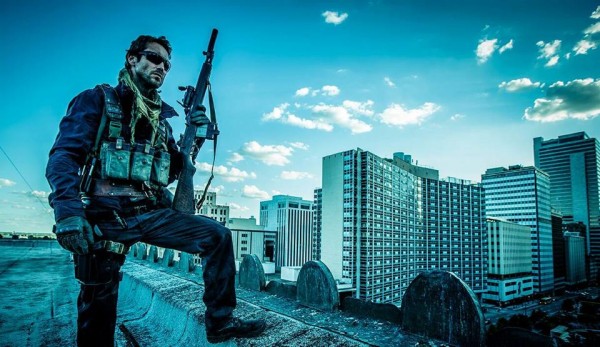 Daylight’s End brings the action goods with a badass hero in Johnny Strong, fast pacing and an unconventional script.

Plot: Years after a mysterious plague has devastated the planet and turned most of humanity into blood-hungry creatures, a rogue drifter on a vengeful hunt stumbles across a band of survivors in an abandoned police station and reluctantly agrees to help them defend themselves and escape to the sanctuary they so desperately need.

Review: I’ve been looking forward to this movie for literally years so I was excited to finally sit down and watch it. I’m happy to say Daylight’s End surpassed my expectations and is a thrilling and atmospheric post-apocalyptic adventure.

Johnny Strong is incredibly charismatic on screen as Rourke and I would like to see him in more movies; in this he reminded me of Clint Eastwood in The Man With No Name Trilogy with a side order of Mel Gibson in Mad Max.

I will watch anything with Lance Henriksen in it as he has such a commanding screen presence with an awesome voice to boot; he plays the leader of the group of survivors who is unsure how trustworthy Rourke is and you can totally see his point of view.

It’s refreshing to see the film shot on location in Dallas, Texas as it’s somewhere we don’t see too often in movies. The way every scene is lit really helps to create this post apocalyptic world and you believe the city is practically deserted where creatures aren’t the biggest threat. I definitely get a Walking Dead vibe except this doesn’t feel caught up in its own self importance the way TWD is.

You aren’t quite sure if the creatures are vampires or zombies but they seem to be a mixture of both and are pretty nightmarish; they aren’t slow plodding zombies but monsters that will run after you and kill you without hesitation.

Daylight’s End is briskly paced and never dull with a script that doesn’t go the way you’d expect; you know how sometimes you watch a movie and you can predict what dialogue comes next? That doesn’t happen with this which keeps things fresh and interesting.

Johnny Strong not only acts in the movie but provides the score which has some pounding drums and rocking electric guitars during the action scenes but there are also some creepy industrial sounds used for the quieter moments too which build up the tension nicely.

The movie is action-packed with plenty of violence and some cool weapons too so if you get to see the movie make sure you’ve got the sound turned up to 11 for maximum impact.

In terms if flaws, I’d say it isn’t exactly anything we haven’t seen before but the first rate cast and well shot action scenes make it stand out in an over saturated genre.

Overall, Daylight’s End brings the action goods with a badass hero in Johnny Strong, fast pacing and an unconventional script.