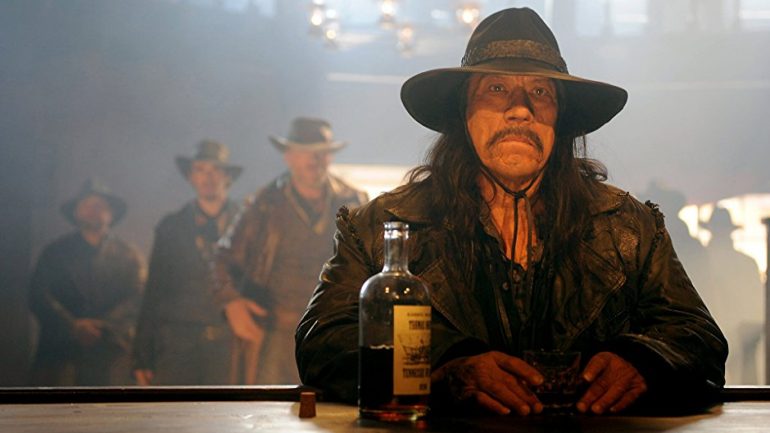 Dead Again in Tombstone is pretty entertaining and nicely shot but it’s let down by some rotten dialogue and dodgy performances. It’s a shame as I really enjoyed the first movie so this feels like a step back.

Plot: Guerrero returns from the dead once more to protect a stolen relic from getting into the hands of a gang of soldiers, which will ultimately cause hell upon earth.

Review: I consider Roel Reine one of the better directors working in independent action movies these days and I really enjoyed the first Dead in Tombstone starring Danny Trejo.

Reine can give even a low budget movie a glossy sheen with impressive cinematography and Dead Again in Tombstone is no different. The way scenes are lit so any time someone comes into a saloon they are surrounded by an almost ethereal light really adds to the supernatural aspect of this otherwise quite forgettable sequel.

Danny Trejo returns as Guerrero but sadly Mickey Rourke is conspicuously absent as the Devil, which is a shame as he was a lot of fun to watch in the first movie. The villain in Dead Again in Tombstone is played by Jake Busey who I still say shouldn’t be cast as an antagonist; he is never intimidating or threatening no matter how hard he tries. He just has one of these faces which has humour all over it so I can never take him seriously as a bad guy. He is still clearly enjoying himself as Col. Jackson Boomer and despite never being threatening he certainly is entertaining as he chews the scenery.

The cast in general do the best with what they have but the dialogue is mostly terrible and even the normally great Danny Trejo struggles to come off as convincing.

It is well paced however, never short on action with gun fights every few minutes and like I said, it looks great with with stunning shots of the beautiful countryside.