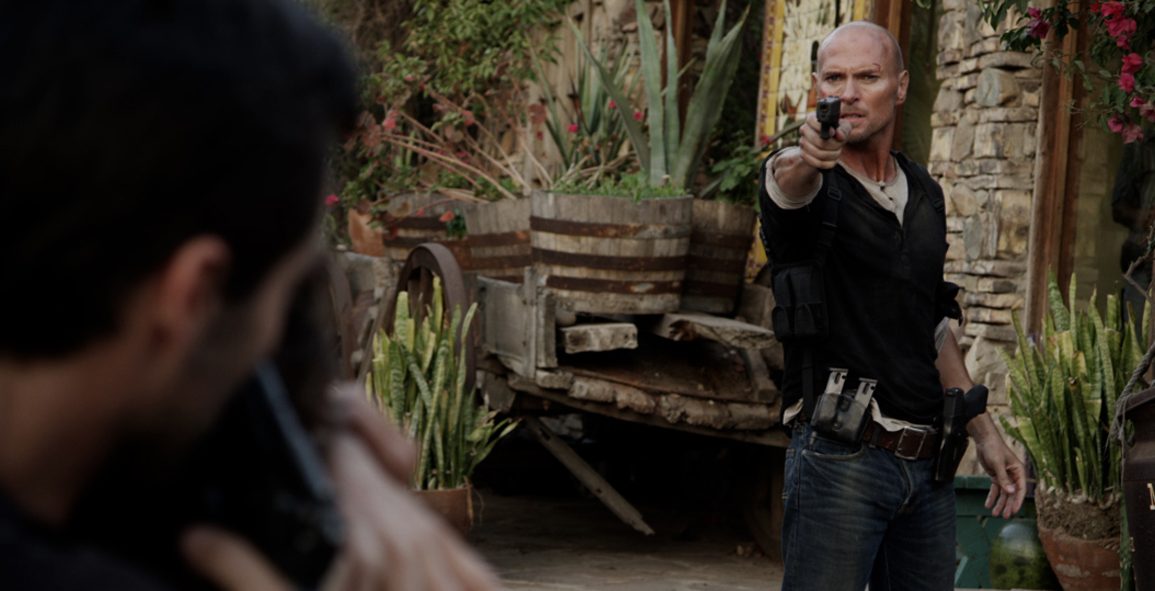 Dead Drop is Luke Goss on badass form and it has characters that you actually care about; it is a little slow in parts but worth it.

Plot: A former CIA operative turned government contractor infiltrates a dangerous North Mexican smuggling ring. After he is thrown out of a plane at 5000 feet and miraculously survives the fall, he embarks on a violent crusade to find the man who threw him out of the plane – his best friend

Review: Oh Amazon, how I love you; I’ve been looking forward to this movie for months and while scouring the internet, I finally find a DVD of Dead Drop. So, here are my thoughts on the movie.

Luke Goss is rapidly becoming the next Bruce Willis and Dead Drop is one of his very best roles, so far. It’s old-school in its action but also has characters that you care about.

The villain, played by the always great Nestor Carbonell isn’t a cardboard cutout but actually quite sympathetic and you can understand where he’s coming from when he finds out that his best friend (Luke Goss) is an undercover CIA Agent.

The relationship between these two men is well developed and because Nestor is in fact a drug dealer, then you know that he has to be stopped, especially after he throws Goss out of a plane… cos you’d be pissed after that.

It’s Hard R stuff as well with plenty of violence and it moves along at a cracking pace. Goss is out for revenge in this movie and anyone who gets in his way either gets hurt or killed.

Cole Hauser also has a small but integral role as the CIA man sent out to stop Goss from blowing the whole operation; his character is interesting as you aren’t sure whether he’s a good guy or not so you are kept guessing.

There is some mild humour as well, from the young kid that Goss takes hostage, but it’s just the right amount and he isn’t annoying.

Director  R. Ellis Frazier’s films are always beautifully shot and this is no different. There is some stunning photography and a particular shot of Carbonell watching horses running during a sunset is quite haunting.

There was a really nice touch when Goss is desperately trying to escape from being shot at and he jumps into a car. The engine won’t start and he looks at Rosary beads hanging from the rear-view mirror; he looks up to heaven quickly and touches the beads and the car immediately starts. I thought that was a cool moment and something a little different too.

In terms of flaws, I guess the finale isn’t all that spectacular but this is a low budget film so you’re not expecting anything too big. Rather than an out and out actionfest, it’s about the resolution of conflict between the two characters.

Overall, Dead Drop is Luke Goss on badass form and it has characters that you actually care about; it is a little slow in parts but worth it.