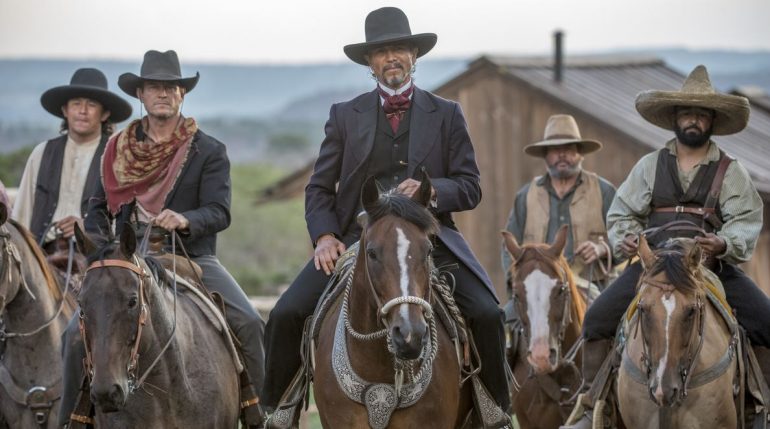 A Walter Hill film is always worth checking out and Dead for a Dollar is a return to form after The Assignment. Willem Dafoe is as magnetic as always and his scenes with Christoph Waltz sizzle. It’s too bad about the odd pacing lag but it’s still entertaining.

Plot: Veteran bounty hunter Max Borlund is deep into Mexico where he encounters professional gambler and outlaw Joe Cribbens – a sworn enemy he sent to prison years before. Max is on a mission to find and return Rachel Kidd, the wife of a wealthy businessman, who as the story is told to Max, has been abducted by Buffalo Soldier Elijah Jones. Max is ultimately faced with a showdown to save honor.

Review: A new Walter Hill film is a bit of an event for me as he is one of my all-time favourite directors; he hasn’t helmed anything since the 2016 movie The Assignment starring Michelle Rodriguez so it’s nice to see him returning to his familiar territory of the Western with Dead for a Dollar. He’s got a fantastic cast that includes Willem Dafoe and Christoph Waltz and they never disappoint.

Dafoe is sort of a villain but he’s made the character of Joe Cribbens interesting and charismatic; he doesn’t go looking for trouble (for the most part) and yet it still manages to find him. Waltz has a kind face so he makes for an appealing lead as the bounty hunter with a heart of gold Max Borlund. He agrees to a job of “rescuing” the kidnapped wife of a businessman but things are not quite what they seem. Rachel Brosnahan shines as Rachel Kidd and she feels believably tough yet sympathetic as the embittered wife who has been “taken” by Elijah (Brandon Scott).

Benjamin Bratt makes for a formidable villain who is truly hateful and one of the better antagonists we’ve seen this year.

Hill has always been a master of creating unsentimental worlds in his pictures filled with tough guys and girls and Dead for a Dollar is no different; when someone dies it happens quickly and brutally never forgetting that violence has consequences.

Like some of the best Westerns Dead for a Dollar does meander in places so it does drag at times and it isn’t the most exciting tale; Hill’s The Long Riders or Last Man Standing moved along well where the runtime of an hour and 45 minutes for this film feels longer than it is. I wouldn’t say it’s boring at any point as you need to have character moments and plot development but it’s not as action-packed as it could be; still, the final shoot-out in the town makes up for any earlier lags and we get a few gun battles throughout.

The music score helps in creating the old Western atmosphere and it matches the visuals even if it isn’t especially memorable. I do miss Ry Cooder from Hill’s movies…

Overall, Dead for a Dollar is a welcome return for director Walter Hill with Willem Dafoe stealing every scene; it’s a little slow in parts and not as exciting as Hill’s older Westerns but it’s still a fun ride.