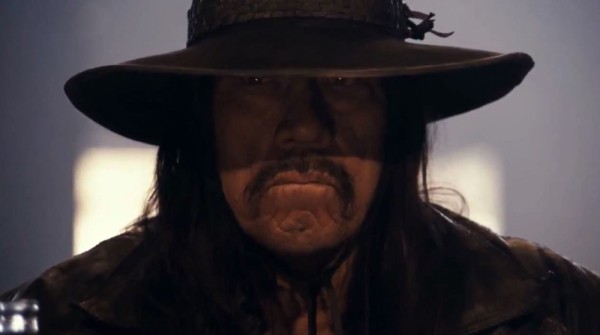 If you’re a fan of Western’s then Dead in Tombstone is essential and even if you’re not a fan you should check it out.

Plot: A gang overruns a small mining town murdering their own leader Guerrero (Trejo) in a cold-blooded power grab. Sentenced to eternity in hell he finds himself confronted by Satan himself (Rourke), offering a daring proposition: deliver the six souls of his former gang and he will escape damnation. With time running out, he sets out on a brutal rampage to avenge his own death.

Review: Roel Reine once again proves why he is one of the best action directors in the business with this top quality supernatural Western. It’s essentially The Crow set in the wild west, which immediately won me over; I’ve always loved Westerns and this movie deserves to find a wide audience. It’s beautifully shot with some great landscape vistas, but also has an ominous vibe as the Devil watches over Danny Trejo’s doomed “hero”.

I love seeing Trejo playing the protagonist rather than a villain and this movie is a bit more complex because he isn’t good or bad. He’s a man who has done bad things but isn’t evil and is essentially him trying to find redemption… by killing lots of people.

The only thing I wasn’t a massive fan of was Mickey Rourke as The Devil; he looks so weird these days and his voice was all over the place. Not sure if he was trying an accent but I wasn’t sure.

Anthony Michael Hall stole the movie as the villainous Red Cavanaugh who is frankly more evil than The Devil. He betrays his “brother” Guerrero (Trejo) and is a complete scumbag. It’s very much open for a sequel too, which I would love to see as I really enjoyed the characters.

It’s nice to see Dina Myer (Starship Troopers) have a big role in the movie and she gets to kick plenty of ass; she’s also still just as gorgeous as she was in 1997.

The music by Hybrid was absolutely fantastic and was recently added to my top ten scores of 2013; twanging guitars, pounding drums and a cool supernatural feel really helped create the atmosphere for the story.

There’s plenty of action with shoot-outs galore and some excellent stunt-work. Towards the end a guy gets set on fire while riding on a horse and I don’t know if it was CGI or not, but either way it was nicely done.

Overall, if you’re a fan of Western’s then Dead in Tombstone is essential and even if you’re not a fan you should check it out simply because it’s action-packed and frankly one of the best action movies of the year.