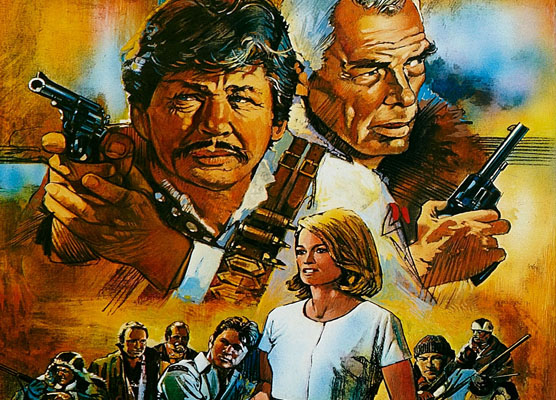 Death Hunt is top tier Bronson with Lee Marvin at his crotchety best and an engaging story that gives us time to get to know the characters while also proving plenty of bloody action scenes.

Plot: Canada 1931: The unsociable trapper Johnson lives for himself in the ice-cold mountains near the Yukon river. During a visit in the town he witnesses a dog-fight. He interrupts the game and buys one of the dogs – almost dead already – for $200 against the owner’s will. When the owner Hazel complains to Mountie Sergeant Millen, he refuses to take action. But then the loathing breeder and his friends accuse Johnson of murder. So Millen, although sympathetic, has to try to arrest him – but Johnson defends his freedom in every way possible.

Review: Charles Bronson, Lee Marvin and Carl Weathers star in this action packed survival thriller from 1981 that was inspired by true events but at the time was apparently criticized by Canadian historians for being heavily fictionalized.

Death Hunt wastes no time in getting going and manages to build up tension with every second while giving the characters time to breathe.

As soon as Charles Bronson makes his entrance as Albert Johnson aka “The Mad Trapper” he says nothing but rescues an injured dog from a brutal dog fight… so that’s us immediately on his side. Just that one scene shows us that this is a man with great empathy who would rather stay away from humans (a bit like me). He says about 2 sentences for the entire movie and yet you are still rooting for him as we know he has done nothing wrong.

Allegedly Charles Bronson once said of his Albert Johnson character: “There are two schools of thought about the characters . . . Some believe the man [Albert Johnson] was a criminal. Others believe, as I do, that he was innocent of any wrongdoing. We decided to show him as a man who was a victim of someone else’s need to perform violence. In trying to protect himself against an unprovoked attack, he was forced to kill one of his assailants.”

The late great Ed Lauter plays Hazel, a deranged local who is the real villain of the piece who is humiliated by Johnson and wants to teach him a lesson but it quickly spirals out of control. He just oozes creepiness and is a really hateful bastard in it. It’s a shame he doesn’t get a more satisfying comeuppance; if he did, then it must have happened off screen.

Lee Marvin is one of my favourite actors and had such a fantastic voice; he was so good at this kind of role and it’s difficult to picture anyone else as the gruff crotchety Millen who doesn’t change with the times (but would rather drink away his problems). He knows in his heart that Johnson didn’t start the fight but Millen’s a man of the law so he has to do his duty and try to bring him in but also try and prevent more bloodshed.

Marvin and Bronson showed no signs of their age in very physical roles; the conditions looked brutal and both of them are running about having firefights battling nature as well as the posse.

There is the odd lag in pacing here and there but these are usually for character moments so we get to know Millen, Sundog (Carl Weathers) and Alvin (Andrew Stevens). The supporting cast also includes Maury Chaykin, William Sanderson and Angie Dickinson. She plays Millen’s woman who wants him to settle down with her but he isn’t sure if he’s coming back and dammit all he’s just too manly to make such promises.

There is a high bodycount with no shortage of blood and the dog fight at the beginning is tough to watch but those were the times and this movie never feels less than authentic; from the coarse conversations between some of the men and the brutality on display it really adds to the realism of everything.

Overall, Death Hunt is an essential Bronson movie with Lee Marvin perfectly cast as Millen and Ed Lauter at his creepy best making for a thrilling and still at times shocking action adventure tale.