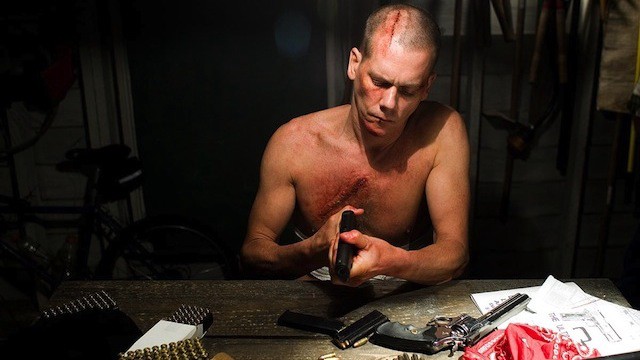 If you’ve never seen Death Sentence then you’re probably best to not read this article as I go into some spoilery details.

I consider James Wan one of the best directors working today and he has really made a name for himself making some of the creepiest horror movies of recent times with the likes of the Conjuring and Insidious series. His biggest box office hit to date (so far) obviously has been Furious 7 but 10 years ago was when he made what I consider to be his finest picture to date: Death Sentence starring Kevin Bacon.

It’s a 70’s style vigilante flick in the vein of Death Wish which tells the tale of Nick Hume, a mild-mannered executive with a perfect life, until one gruesome night he witnesses something that changes him forever. Transformed by grief, Hume eventually comes to the disturbing conclusion that no length is too great when protecting his family.

Sure, the plot is your standard revenge/vigilante fare but I think this is one of the best executed of the genre in many years and deserves more love.

Bacon gives a heart wrenching portrayal of a father who loses everything and is pushed too far by the murder of his son and no matter how many times I’ve seen the film it is always a tough watch. It’s incredibly intense and perfectly paced with plenty of hard R action and at times is almost more of a horror movie. The opening 10 minutes perfectly establishes the characters with Nick Hume a loving dad who dotes on his son Brendan but just maybe doesn’t pay enough attention to his other son Lucas. Within a few minutes we see that Nicholas’ seemingly perfect family is torn apart when Nicholas stops for gas and Brendan is killed in a gang initiation.

When Nick is advised by the most worthless lawyer in the history of the universe that they can make a deal and the killer can go to jail for maybe 3-5 years Nick decides at the last minute not to testify so he can have some quality time alone with the man who killed his boy. When Nick confronts Joe Darley (Matt O’Leary) the two men fight and Joe gets stabbed and dies. Thus begins a war between Nick Hume and Billy Darley (Garrett Hedlund) who vows revenge after his brother’s death.

In the Death Wish movies Paul Kersey (Charles Bronson) is pretty much invincible and with Bronson’s icy coolness you never really get all that emotionally involved and just enjoy the ride. With Death Sentence however, the story is emotionally raw and we genuinely care about Hume’s family and his slow descent into the dark side. This is one of Kevin Bacon’s darkest performances to date as we can feel his pain and you are 100% behind his taste for vengeance, despite the consequences.

Garrett Hedlund is a suitably nasty piece of shit and both he and his cronies are total lowlifes so you savor every moment of them getting their comeuppance.

John Goodman who plays Billy’s verbally abusive father is pretty despicable and once again proves what a great actor he is as it gives you a look into why Billy is the man he is.

The violence is brutal (and quite awesome) as Nick goes on a rampage with a shotgun at the end blowing legs off and shooting bad guys in the face. It’s such an intense watch that it’s almost like you feel guilty for intruding on Nick’s grief but you can’t look away.

There is some superlative camera work and despite the gritty tone the film never loses a sense of style, especially the scenes with Billy and his gang where they are usually shown in a reddish demonic light.

Charlie Clouse’s score is perfect and really helps to add some emotional heft during some scenes but is never overly intrusive. I could have done without some of the songs playing over a few scenes which made it feel a little like a soap opera but aside from that the music is excellent.

By the end of the film I’m always pretty exhausted as Nick has shaved his head and killed all of the gang members. He and Billy have fatally shot each other and they sit on a bench staring at each other as Billy says “Look at you. You look like one of us. Look what I made you.” It’s a devastating and true line because now Nick has not only lost everything but he has essentially become what he hates and has gained nothing meaning the bad guy essentially has won.

It then cuts to Nick arriving home and sitting on the couch one last time as he watches home videos of his family before he drifts off to meet them. By the end of this nightmare you aren’t thinking violence is cool but just how revenge can consume you and destroy your entire life.

To this day I think Death Sentence is the best Death Wish sequel we never got and after 10 years it’s still emotionally draining and a tough watch but also one of the best vigilante movies to date and it’s rare to see something this hardcore in this day and age. James Wan is the reason Aquaman will likely be the best DCEU movie yet and he’s a director I will always follow.