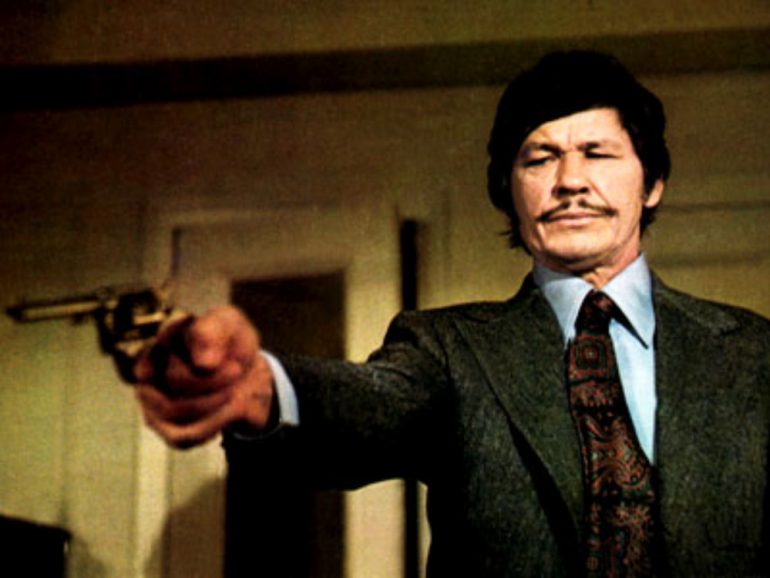 Death Wish is a classic of the genre which asks interesting moral questions without preaching to the audience.

Plot: Once a mild-mannered liberal, New York City architect Paul Kersey (Charles Bronson) snaps when intruders break into his home, murdering his wife (Hope Lange) and violently raping his daughter. A business trip to Tucson, Ariz., lands him a gift from a client, a revolver he uses to patrol the streets when he returns home. Frustrated that the police cannot find the intruders, he become a vigilante, gunning down any criminal that crosses his path. The public finds this vigilantism heroic.

Review: I consider Death Wish in the same league as Dirty Harry, a manly classic. Both have that gritty 70’s style and don’t pull any punches. Nobody is really a hero and just doing what they can to survive. Death Wish stars legendary Bad Ass Charles Bronson as a happily married father and architect in this fabulously written vigilante classic.

In the opening scene Paul Kersey (Bronson) and his wife are sitting happily on the beach living an oh so perfect life. When he suggests they get it on right there, his wife replies “We’re too civilized for that”. This is a great precursor to what will happen as the story progresses. One of his co-workers later discusses the crime statistics in the city and Kersey is unfazed and described as a “bleeding heart liberal”; he was also a conscientious objector so this isn’t a man who is pro guns… yet.

When the family return from vacation, Kersey’s wife and daughter are brutally assaulted in their apartment. It remains one of the most disturbing scenes I’ve seen in a film and really leaves a bad taste in the mouth. Kersey is devastated at the loss of his wife and near catatonia of his daughter. As the police department become more inept he eventually decides to take matters into his own hands. Now, don’t think it goes all one man army as it very much isn’t that kind of story.

He goes out for evening walks and it’s a slow progression/decline where he loses his civility with the more street thugs he kills. It’s a great moral quandary as you utterly sympathize with him and cheer him on as he cleans the street of scum. However, what makes him any better than them? This is the question the film asks; If you’re civilized and try to turn a blind eye to crime, are you weak? So many people ignore crime until it affects them and Kersey is the same. He never cared for crime statistics until his family became one. He takes action because he feels he has to; no one else is cleaning the streets so it’s up to him. Does he enjoy killing? No, after his first kill he runs into his apartment and vomits. His hands shake and he is riddled with guilt, and yet he is still driven to continue his quest to rid the streets of crime.

I won’t say how the film ends in case you haven’t seen it, but if you’re a fan of vigilante movies, this is the ultimate. Bronson is sympathetic and believable. Keep an eye our for a very young Jeff Goldblum as one of the thugs and Denzel Washington in his debut.

Overall, Death Wish is a classic of the genre which asks interesting moral questions without preaching to the audience.