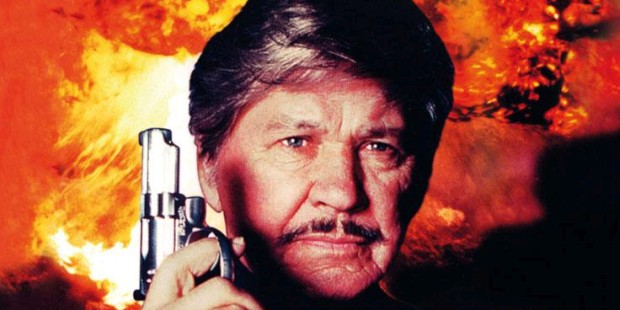 Death Wish V isn’t as bad as everyone says and with plenty of imaginative bad guy deaths and Michael Park’s stellar turn as the villain, there are worse ways to spend an evening.

Plot: Paul Kersey is back at working vigilante justice when when his fiancée, Olivia, has her business threatened by mobsters.

Review: The final movie in the Death Wish series is widely regarded as pretty terrible… but not by me. Frankly, I can’t say any movie with Charlie Bronson is terrible simply because he is in it. The highlight of this movie however, is Michael Parks who plays arguably the best villain of the series.

There is something just terrifying about him any time he is on screen, even though he doesn’t need to do much. He speaks with a low voice and only ever loses his cool after Kersey has really pushed him to the limit.

There isn’t anything particularly disturbing in the movie and thankfully there are no rape scenes at all. The movie is a standard actioner with some of the most creative bad guys deaths of all time.

One guy gets shot and his head is minced up in some kind of huge machine and another guy gets killed by a remote controlled football. Yup, this isn’t the gritty world of the first Death Wish, this is pure cartoon stuff but man is it a lotta fun. Michael Park’s eventual death is extremely satisfying too as he falls into a handily placed vat of acid.

It was well paced and pretty much as soon as Parks is on screen the film is instantly tense; some of it was predictable though, I mean I knew as soon as I saw Miguel Sandoval’s name in the opening credits that he was going to be a bad guy… isn’t he always?

The funny thing about the Death Wish sequels is that Bronson himself actually hated them. He thought they were just violence for violence sake and that they lacked the meaning of the first movie. It’s understandable because they’d pretty much lost all depth by this movie but I still had a blast with it.

It had one of the better scores of the series with a moody orchestral theme which helped create a threatening atmosphere throughout the movie.

Some of the editing was a bit shonky though and it does come across as a bit cheap looking, which is a shame as it is a pretty entertaining vigilante flick. Once again if you haven’t read the book Bronson’s Back: The Making of the Death Wish Films, you should definitely pick it up as it gives a great insight behind the scenes of each movie in the series.

Overall, Death Wish V isn’t as bad as everyone says and with plenty of imaginative bad guy deaths and Michael Park’s stellar turn as the villain, there are worse ways to spend an evening.