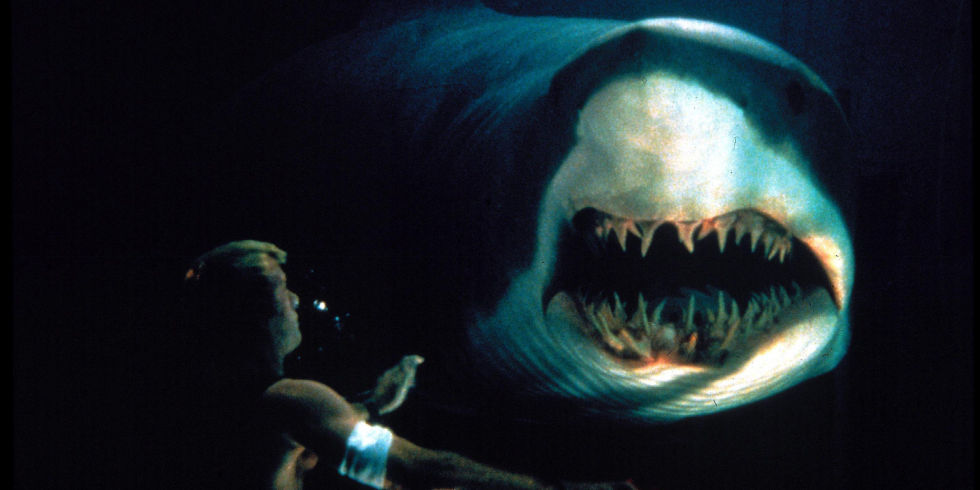 With The Meg getting ever closer it got me thinking that I’ve always had a soft spot for shark movies; the original Jaws will always be the king however, I’ve got a special place in my heart for Deep Blue Sea from director Renny Harlin. (Not very) Interesting sidenote: Deep Blue Sea was one of the first DVDs I ever bought; the very first was Soldier starring Kurt Russell.

Anyway, recently a sequel to Deep Blue Sea was released (straight to DVD) so let’s take a look at which is the better film.

Plot: On an island research facility, Dr. Susan McAlester (Saffron Burrows) is harvesting the brain tissue of DNA-altered sharks as a possible cure for Alzheimer’s disease. When the facility’s backers send an executive (Samuel L. Jackson) to investigate the experiments, a routine procedure goes awry and a shark starts attacking the researchers. Now, with sharks outnumbering their human captors, McAlester and her team must figure out a way to stop them from escaping to the ocean and breeding.

Despite the CG looking more than a little ropey now I still love this movie; the cast alone makes it worth a watch with Thomas Jane, Saffron Burrows, LL Cool J, Stellan Skarsgård and Samuel L. Jackson all playing it straight in a cheese-filled action horror featuring genetically mutated sharks who are now super smart.

Thomas Jane is the action-hero style lead who doesn’t say much but is cool and saves people when required; we all know that the best scene of the film is Samuel L. Jackson’s iconic speech where he tries to bring the team together but is brought to an abrupt halt due to being eaten by a shark. Yes, the effects are terrible but at the time that scene caused quite a stir and is still massively entertaining.

It really is the perfect mix of action and horror with some great explosions and innovative set-pieces; there are a few memorable gore moments too like Stellan Skarsgård‘s arm being removed without his permission.

Trevor Rabin provides one of his best music scores to date without managing to sound anything like Jaws which I imagine was quite a feat. It’s filled with tension, excitement and electric guitars remaining one of my personal favourite music scores.

After 19 years some of Deep Blue Sea’s effects look quaint and it’s all very silly but it knows it and so do the cast making it a fun ride.

Plot: A shark conservationist is hired as a consultant on a top-secret project on genetically-enhanced sharks, funded by a pharmaceutical billionaire. But soon the highly intelligent super-sharks turn on their masters and begin to pick them off one by one.

This belated sequel came out a few months ago with very little promotion or fanfare… that’s because it’s crap. I mean, it started off OK however, it just was essentially a rehash of the original movie with zero star power and a tiny budget. Admittedly the shark effects are a little better than the first but we don’t get to see much of them because some genius thought it would be a better idea to have lots of tiny baby sharks… that make noises. Now I’m no scientist but I’m pretty sure sharks or even mutated baby sharks would not make Gremlin-like noises but in this movie they do. The sheer lack of any recognizable faces considering the great cast the first movie had was very disappointing and I didn’t care about anyone.

It takes ages to actually get going and nothing happens for about 45 minutes, then all we get is the stupid baby sharks which was just a terrible idea.

This also doesn’t have the same music with no Trevor Rabin themes returning and it’s all totally forgettable.

Obviously the first one wins without a doubt; the second movie brought nothing new and despite being open for a part 3 they should have left it alone and kept Deep Blue Sea as a standalone feature.