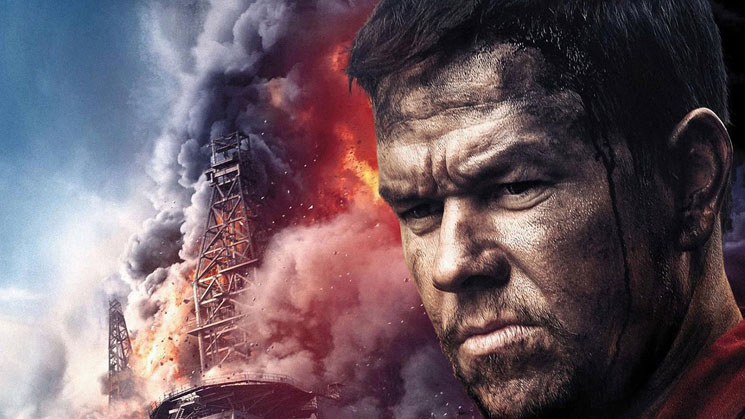 It takes a while to get going and there are some incomprehensible accents but Deepwater Horizon is still spectacular with a harrowing second half that will have you on the edge of your seat. Be sure to see it in IMAX for maximum effect.

Plot: On April 20th, 2010, one of the world’s largest man-made disasters occurred on the Deepwater Horizon in the Gulf of Mexico. Directed by Peter Berg (Lone Survivor), this story honors the brave men and women whose heroism would save many on board, and change everyone’s lives forever.

Review: Although this is classed as an action movie on IMDB it really is more of a character piece in the first half and it’s only in the second part of the movie that things get interesting. This means that the first half takes a while to get going as we get to know our characters; I wasn’t bored at any point but the pace did drag a little in parts.

The acting by the entire cast was excellent and you can never go wrong with Kurt Russell at his gruff best; Mark Wahlberg also puts in a sold performance but am I the only person who at various points couldn’t understand what people were saying? This was especially noticeable when they were on the oil rig and the accents are rather strong where the characters speak a little too fast so I struggled to make out what was said. This was especially the case with John Malkovich who I could barely understand.

It does feel rather crass to discuss the “action” considering this is based on true events where people died but I am judging it purely as a movie. Director  Peter Berg knows how to do set-pieces and the final 45 minutes of Deepwater Horizon are spectacular and harrowing; I think it captures the utter terror these people faced as their world literally collapsed around them.

I saw this movie in IMAX so the sound was incredible when the rig starts to explode; the surround sound really came into effect and helped to immerse you in this nightmare.

The music was ominous and ratcheted up the tension and despite not having any real tune it worked in helping to create the idea that nature was a monster that can’t truly be controlled.

It’s quite moving in parts especially towards the end as we get a fitting tribute to the real men and women who died which gives the movie more heart than your average disaster movie.

Overall, despite taking a while to get going and some incomprehensible accents Deepwater Horizon is spectacular with a harrowing second half that will have you on the edge of your seat. Be sure to see it in IMAX for maximum effect.