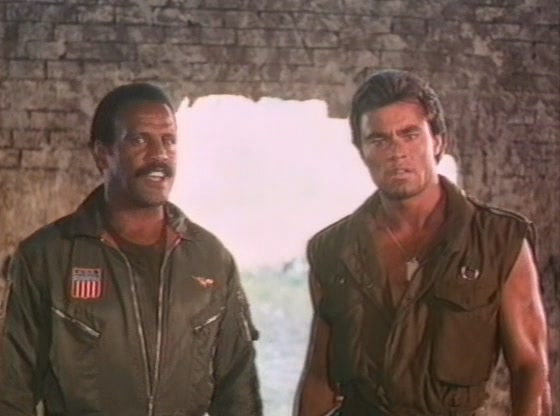 Delta Force Commando is pretty bad and it’s hard to even recommend it on a “so bad, it’s good” basis but if you’re a fan of Fred Williamson then check it out, just don’t blame me…

Plot: Latin American revolutionaries invade a military base on Puerto Rico, and steal a nuclear bomb, killing a pregnant woman in the process. Captain Beck (Fred Williamson) is assigned to track the revolutionaries to their home turf, and recover the weapon. The late woman’s husband, eager for revenge, accompanies Beck to an area near the Nicaraguan border, where they encounter hostile revolutionary forces.

Review: I’m a big fan of Fred Williamson; the man oozes cool from every pore, alas even he can’t redeem this rather pathetic movie about a dude becoming a one man army after some terrorists steal a nuke and kill his pregnant wife.

You might think “wait a minute, that sounds awesome” but it really isn’t. This was during Williamson’s “Italian Period” as I like to call it and despite Black Cobra being fun Delta Force Commando is lifeless and dull. There is plenty of action and yet it lacks any thrills or tension at all; the dubbing and acting are terrible at best and Williamson isn’t even the lead; Brett Clark plays Lt. Tony Turner who is arguably the least interesting protagonist… ever.

Scenes go on for too long and it really could have used an editor; it’s only 95 minutes long and yet it feels like it lasts forever.

The plus points aside from Fred Williamson are the appearance of Mark Gregory (Thunder Warrior) as the main villain. He is clearly having a blast and the scene where he licks his fingers and rubs them over the scar on his face is hilariously bizarre. Also note the women’s top he appears to be wearing throughout; he also has a rather spectacular bad guy death by having a grenade dropped down his pans (Hard Target style) then kicked out a window where he promptly explodes.
So the film is not without is entertainment value but for all the wrong reasons.

As much as it’s cool to see lots of practical action, it’s handled so poorly that at no point will you be remotely engaged. A scene involving Tony trying to rescue Capt. Samuel Beck (Williamson) from a crashed bus should be an awesome stunt but because it takes so long to actually happen then it just became dull.

It’s also incredibly cheap looking and there are moments when guns are firing and yet here are no sound effects.

Overall, Delta Force Commando is pretty bad and it’s hard to even recommend it on a “so bad, it’s good” basis but if you’re a fan of Fred Williamson then check it out, just don’t blame me…