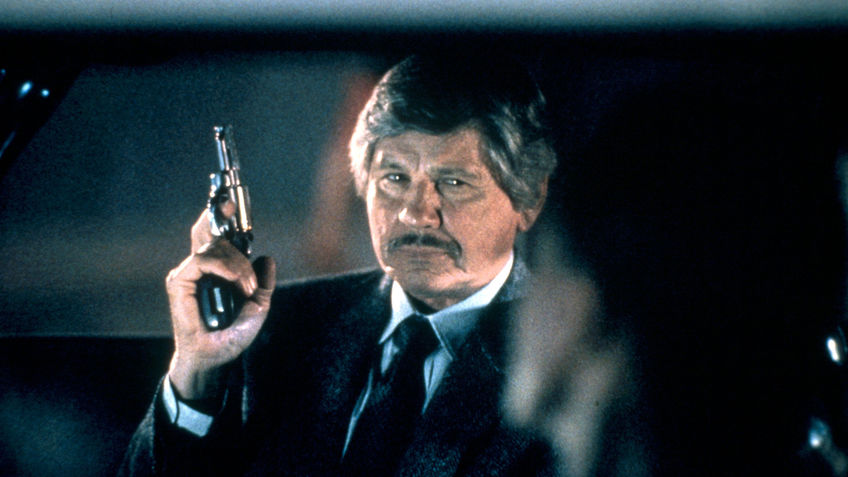 Plot: A Los Angeles police detective (Charles Bronson) and his partner (Perry Lopez) hunt down a pimp (Juan Fernandez) who preys on teenagers.

Kinjite: Forbidden Subjects doesn’t get talked about quite as much as Charles Bronson’s more popular fare like the Death Wish series, Murphy’s Law or The Mechanic; it’s a sleazy tale and you feel like you need a bath afterwards, but I do still enjoy elements of it.

This was Charles Bronson’s 9th and final movie with director J. Lee Thompson having worked together previously on St. Ives, The White Buffalo, Caboblanco, 10 to Midnight, The Evil That Men Do, Murphy’s Law, Death Wish 4: The Crackdown and Messenger of Death. It was also his final movie with Cannon Pictures however, he would work with Menahem Golan again on Death Wish V in 1994.

It’s endlessly entertaining watching the invincible Bronson beating up scumbags and in this movie his character Lieutenant Crowe is at his wits’ end dealing with the dregs of society on a daily basis. He does seem a bit old to be playing a cop (he was 68) which was a criticism labelled towards the movie at the time but it’s Bronson, so we’ll let it slide.

Crowe is tough as nails but also not all that sympathetic as he is openly racist towards the Japanese. This was very much of the time as many Hollywood movies regularly painted the Japanese as villains and as Bronson once stated “There is a lot of fear about Japan’s growth. I only want to be honest to what people feel.”

There are several lines of dialogue which jar like “Some oriental guy touched my holy of holies!” but on the other hand it does have gems like “you are gonna have to stick your head between your legs to tell the time”. So this is likely not a movie that would get made today…

As I say it’s not an easy watch at times dealing with subjects like sex and child prostitution (these are forbidden subjects in Japan so that’s what the meaning of the film’s title is) so it does make for uncomfortable viewing. It’s not one that I sit through too often but there are some great action scenes with a satisfyingly explosive showdown at the docks. Where would action pictures be without all those conveniently placed barrels that always have to blow up? Bronson also uses a sex toy against an abuser which is hilarious.

I don’t think I could ever believe Juan Fernández playing a hero as he got a bit typecast in the 80’s playing villains especially in movies like Crocodile Dundee II. He is especially abhorrent in Kinjite as Duke, making money selling little girls as prostitutes but also having his way with them too. He is an absolute monster but his comeuppance at the end is more satisfying than any over the top death scene. Speaking of which, pay attention for a quick glimpse of Danny Trejo as one of the prisoners at the end.

*Spoiler alert* One thing that bothered me was that Hiroshi Hada (James Pax) who sexually assaulted Crowe’s daughter doesn’t get caught at the end but I suppose his own daughter goes through Hell and then kills herself so he has to live with that.

If you keep your eyes open during the iconic sequence where Crowe forces Duke to eat his watch you can see he actually slides it down his sleeve instead. Oops!

The music is very 80’s but it matches the neon sleaze-filled atmosphere and works for the subject matter.

Overall, Kinjite: Forbidden Subjects is a tough watch at times with Bronson making for a character who is hard to empathize with at times but there is enough action to keep things moving and it’s very 80’s which is never a bad thing.