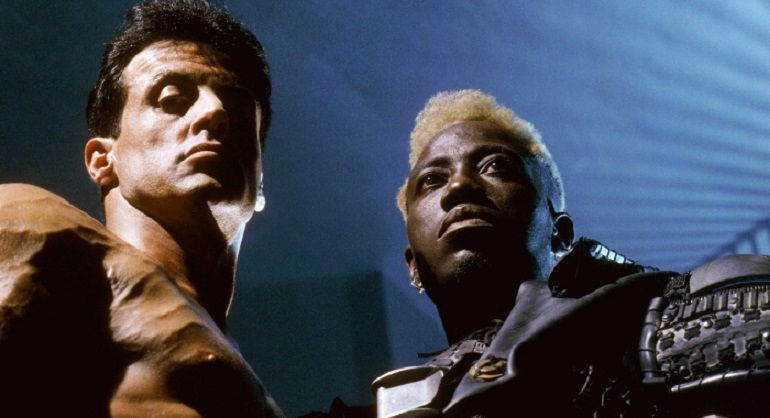 Every few days someone is saying how the real world is mimicking art with many comparisons being made with the Sylvester Stallone classic Demolition Man. At the time it was seen as a funny parody but over the past few years a lot of it has become true.

The writer of Demolition Man Daniel Waters recently talked with Vulture about the Corona Virus, the 3 sea shells and more.

At one point Vulture mentions that Dr. Fauci said the corona virus could, and maybe should, bring about an end to handshakes…

“It’s funny, a friend of mine introduced me to her boyfriend at the New Beverly theater, just as the last few theaters were open, and as we did it we were like, “This could be the last handshake we ever give.” Two total strangers, we had a look in our eyes like, “That could be it, huh? That felt weird.” I loved seeing the quote-unquote handshake Rob Schneider and Benjamin Bratt give each other in this. I can totally see it. Once you get into, “We don’t want anything icky in the future,” then it’s funny how it just happens. You wouldn’t touch. You wouldn’t have sex, oh, God, no.

Sandra Bullock is so good in the movie. The line, “They used handfuls of wadded-up paper Bullock’s character, a 20th-century nostalgist named Lieutenant Lenina Huxley, has to explain to a smug 2032 crowd that Stallone’s character, Sergeant John Spartan, has no clue how to use the three seashells — the use of which is never explained.” — the way she says it, like, that is kind of primitive, isn’t it? Why would we use handfuls of wadded-up paper? And, “I was wondering if you’d like to have sex?” I don’t think I would have dared to go as far with it if I didn’t know Stallone was going to be the star. Knowing I’ve got the great caveman as my lead actor, I could lean even more into it.”

The mini-monologue (Non-virtual sexual contact has been banned in the future, as well as smoking, alcohol, caffeine, contact sports, meat, bad language, chocolate, gasoline, noneducational toys, and anything spicy.) she gives, about the different pandemics that led to this point—

“That speech, it seems so reasonable now. Slowly but surely, we’re getting them all. When that movie came out, there was still smoking in bars. Now you can’t even smoke outside. Coffee’s got its lovers, but it’s not great for you.”

He then goes on to mention that all important point:

“As we speak, I’m wearing my T-shirt that says “Ask Me How To Use The Three Seashells.” I was doing jury duty, and this bailiff comes up to me after we’re dismissed, and she’s like, “I have a theory for the three seashells,” and goes into this elaborate thing about how you use one seashell to pinch apart your bottom, the other seashell to pull out the excrement, and then the third seashell has a hose that washes off the remains. I’m like, “Sure. Does this mean I’m out of jury duty?”

My favorite joke of the script got cut. After Stallone tries to deal with the seashells in the bathroom, he washes his hands, and when he tries to dry them, it’s the same shitty hand dryer that we have today. He’s like, “What the fuck? You guys have done all this and you still haven’t come up with a good hand dryer?”

You can check out the full interview with Daniel Waters over at Vulture.