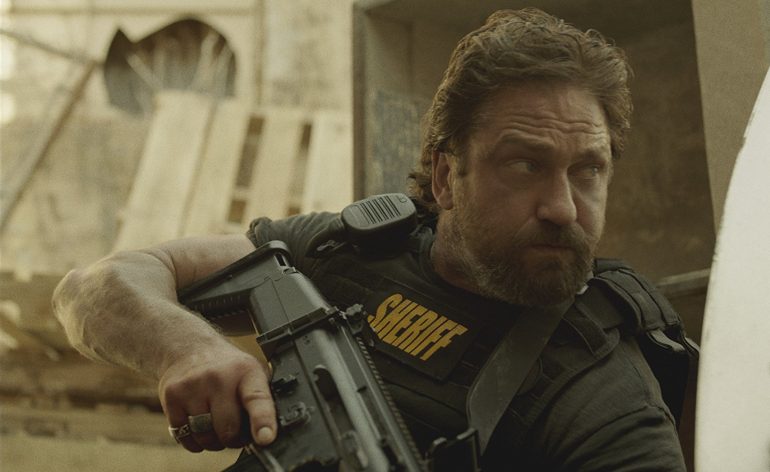 Den of Thieves has some impressive shoot-outs and Butler at his badass best but it’s overlong and drags in places, never quite living up to being a modern Heat no matter how hard it tries.

Plot: A gritty Los Angeles crime saga which follows the intersecting and often personally connected lives of an elite unit of the LA County Sheriff’s Dept. and the state’s most successful bank robbery crew as the outlaws plan a seemingly impossible heist on the Federal Reserve Bank of downtown Los Angeles.

Review: Den of Thieves has been described as a heist action thriller in the same vein as Michael Mann’s Heat; obviously it is nowhere near that caliber but it’s still an entertaining (if overlong) journey into the psyche of an obsessed cop and criminal mastermind.

As I say in every review of a Gerard Butler film, he can never hide his Scottish accent which slips out every few sentences but his character ‘Big Nick’ O’Brien is still extremely watchable and one of his best. I love how he is very much an anti-hero; he drinks too much, swears a lot, lives for his job and is generally an asshole to most of the people he meets. These are common traits to characters in a Michael Mann movie but no matter how hard it tries this never quite reaches that level. Despite having some very amusing one-liners the script is mostly just people saying “fuck” a lot and lacks truly memorable dialogue.

Butler is at his gravelly best though and he is clearly enjoying playing such a layered character like Nick; despite mostly being a badass there’s a scene half way through where he breaks down crying in his car and it’s one of the most genuinely moving moments of the entire film. His job has cost him a lot of things including his family and it might just consume him utterly.

The supporting cast are all at the top of their game and everyone feels authentically world weary and desperate; we even sort of want the bad guys to complete their big heist as it is so elaborately planned. O’Shea Jackson Jr. has one of his meatiest roles since breaking out with Straight Outta Compton a few years ago and is one of my favourite characters.

It’s also refreshingly grown-up entertainment and unapologetically manly with Big Nick busting everyone’s balls he comes across; the action is all done practically too so there is little in the way of noticeable special effects.

The plot doesn’t go in predictable directions, keeping you guessing at the outcome until the satisfying finale which wraps everything up nicely.

After a thrilling opening sequence with a security truck robbery which culminates in an impressive shoot-out there is very little action until the climax when we get an even bigger gun battle. It’s incredibly satisfying and well executed however, between the gun fights the pacing slows down and I thought it dragged in places and could have had a few minutes cut to keep things tighter.

Overall, Den of Thieves is one of the manliest movies you’ll see this year as everyone tries to seem tougher than the next guy but there is a little more to the characters than you’d first expect and Butler eats up the screen as Big Nick. The shoot-outs are well staged but it is a little too long with a pacing lag in the mid-section.