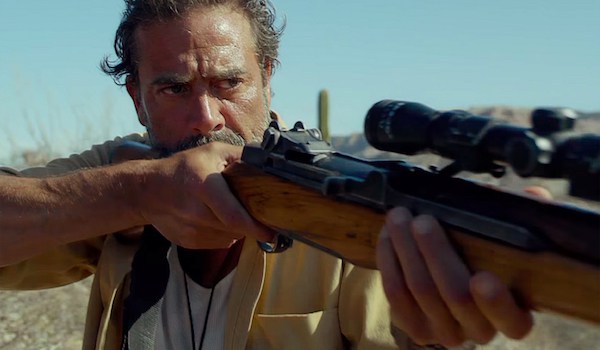 Desierto is not without its tense moments and it is pleasingly violent with JDM playing a suitably psychotic antagonist; it’s just a shame there was no one to care about. I wouldn’t watch it again.

Plot: When their truck suddenly breaks down, a migrant named Moises leads 13 others on a trek through the harsh terrain along the U.S.-Mexico border. Inconvenience soon turns into horror as the sounds of gunfire shatter the tranquil desert landscape. Desperate and on the run, the survivors find themselves in a fight for their lives against a psychotic sniper and his vicious hunting dog. Moises must now use his wits and instincts to kill the relentless predator before he claims more victims.

Review: I watched this on Netflix while bored a few weeks back but didn’t get around to do a review for it probably because it made very little impact on me. Desierto wasn’t terrible, it just had no one to really root for.

Gael García Bernal plays illegal immigrant Moises who is trying to sneak across the border to be reunited with his son; unfortunately, Jeffrey Dean Morgan’s Sam has other plans and doesn’t want any illegals coming into America and will shoot anyone who tries.

Morgan is at his best playing these kinds of deranged characters and he is magnetic any time he is on screen; I like Bernal as an actor but I never gave a shit what happened to Moises or his friends.

Sam essentially spends his days driving around with his trusty dog shooting illegal immigrants… and that’s about it. We never really get any character development so we don’t care what happens to anyone or why Sam hates them so much.

It is at least rather violent and gets quite tense at times managing to mix several genres together; it’s essentially an action/horror/drama with equal doses of each. It’s very much a movie for our times and I’m sure there are plenty of people who would be on the side of Sam but I never found anyone sympathetic so when it ended I felt generally unmoved. I was waiting for some preachy message but it thankfully never tried to do that, just giving us a basic premise and a few thrills.

It’s nicely shot and you do feel a little empathy for Moises and his comrades (at times) as they try to dodge Sam while also surviving the scorching desert heat.

Overall, Desierto is a fast paced action thriller with Jeffrey Dean Morgan doing what he does best but I never really cared for anyone and there were no real heroes to root for. I have no desire to watch it again but it is at least a diverting watch.