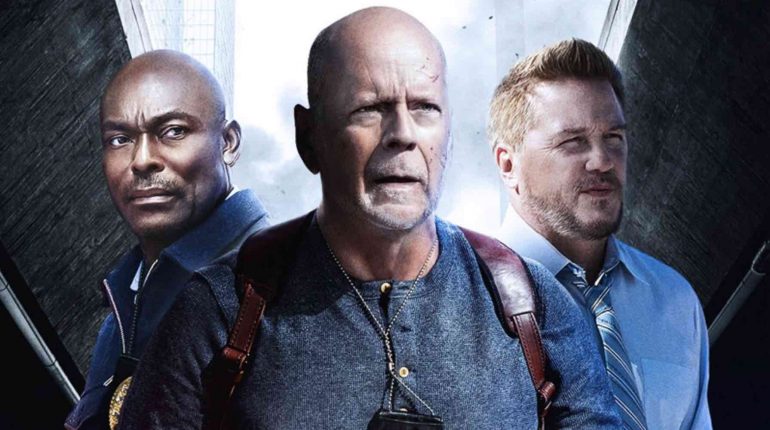 Detective Knight: Rogue has an exciting opening sequence which promises a gritty crime actioner and it certainly has its moments but the first half is rather dull and Bruce Willis disappears for long periods of time so we never really feel like we should care about this character in any way. The sequel looks promising but this first film isn’t the greatest and I’m not sure after watching it you’ll be interested in returning for more.

Plot: Bruce Willis stars as veteran Detective James Knight, dedicated to navigating the demanding streets of Los Angeles, in this thrilling first of a trilogy of films. As the city prepares for Halloween, mask-wearing armed robbers critically wound Knight’s partner in a shootout following a heist. With Knight in hot pursuit, the bandits flee L.A. for New York, where the detective’s dark past collides with his present case and threatens to tear his world apart… unless redemption can claim Knight first.

Review: After seeing the trailer the other day for Detective Knight: Redemption starring Bruce Willis I admittedly thought it looked decent so it got me intrigued to check out the first film in the trilogy Detective Knight: Rogue which is currently on Amazon Prime. It’s a familiar tale about a group mask-wearing armed robbers who critically wound a detective’s partner in a shootout following a heist around Halloween.

Detective Knight: Rogue starts off well with an impressive heist and shoot-out sequence promising a gritty and exciting crime picture. Sadly, it never quite lives up to that and the next hour is rather plodding with few action scenes. We get a few fight scenes and a shoot-out at the end but few of the characters keep you engaged and you’ll feel nothing throughout.

As the film is called Detective Knight (Bruce Willis) then you’re expecting him to be this exciting lead but most of the story centers around Casey (Beau Mirchoff) who is one of the armed robbers and is easily the most intriguing character; we never really like or hate Knight as he isn’t around long enough to care about. Now we all know of Willis’s health issues so I don’t want to say anything about his performance but its actually the script that lets him down as he only shows up sporadically and doesn’t feel like the lead protagonist. Bruce does get to say a couple of one-liners like “Trick or Treat, Motherfucker” but he isn’t given much to work with otherwise.

The rest of the cast do their best and I always like Michael Eklund who is one of those underrated character actors that makes for an enjoyable villain.

The music score had its moments and was one of the best aspects of the film working with the gritty atmosphere.

The sequel loos like it’s going to pick up where this left off and it looks like it has a more interesting story but we shall see.

Overall, Detective Knight: Rogue has some entertaining moments and it has an intense opening sequence but the fact that Bruce Willis only shows up every so often considering he’s meant to be playing the lead leaves you feeling nothing as there is no real emotional engagement with the story or characters. Casey is the most fleshed out and he shows real personality but maybe things will get more exciting in the sequel.