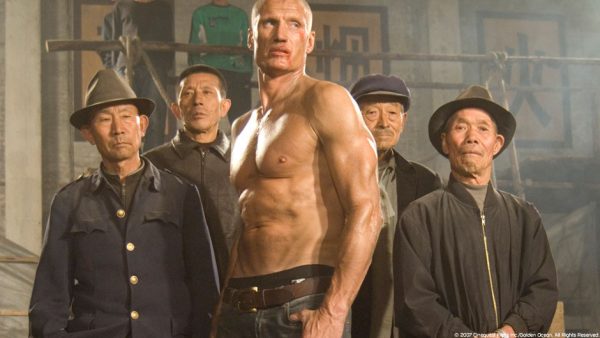 It’s been just over 10 years since Dolph Lundgren tried his hand at an Indiana Jones style adventure film which had mixed results with a much smaller budget and forgettable characters.

In Diamond Dogs an American ex-soldier Ronson (Dolph Lundgren) has fallen on hard times. He has been reduced to brutal illegal prizefights in the dingy backstreets of a city in Inner Mongolia in an attempt to pay off his debts. Things go from bad to worse after Ronson is caught in the act and arrested. The judge offers Ronson a choice: pay off all his debts in a month or return to jail. While Ronson is busy debating his limited options, he encounters the alluring Anika (Yu Nan), whom he follows down an alley only to be attacked by three thugs. After successfully beating off his attackers, he learns that the fight has been an elaborate audition for Anika’s stepfather Chambers, a wealthy New York art collector. Chambers offers Ronson enough money to settle all his debts if he will guide an expedition composed of Chambers (William Shriver), Anika, several of Chambers’ men and archeologist Ang Shaw into the rugged mountains of Mongolia. With the help of a secret map, Chambers hopes to locate a fabled temple…

It doesn’t waste time in getting going and has a punch up every few minutes with Dolph doing what he does best. It also has Yu Nan as the potential love interest who is sadly wasted in a thankless role. Dolph and Nan would be reunited for The Expendables 2.

The villains are rather one note and Dolph’s final fight with the main bad guy is over too quickly. Even now I struggle to remember much of the film; the one aspect which stood out however, was the spectacular scenery of Inner Mongolia which is something we don’t see in too many movies.

Some of the acting was pretty ropey at best too so it’s easy to see why the film wasn’t a big success.

Diamond Dogs was initially meant to be the start of a new franchise but after a few days of filming the director allegedly dropped out with Dolph replacing him however, the cut that was released is the producer’s cut. According to IMDB a potential sequel was supposed to be called “Tumbling Dice” where the plot involved Ronson traveling to Shanghai to battle the twin descendants of Genghis Khan for control of a mystical spear. After the less than spectacular result generated by “Diamond Dogs” messy production, Lundgren bowed out and all plans for future Xander Ronson films were cancelled.

While watching the movie I always thought it had the potential to be a franchise so it’s a shame it didn’t really work out; it’s not one of Lundgren’s better movies but it has enough to be entertaining.