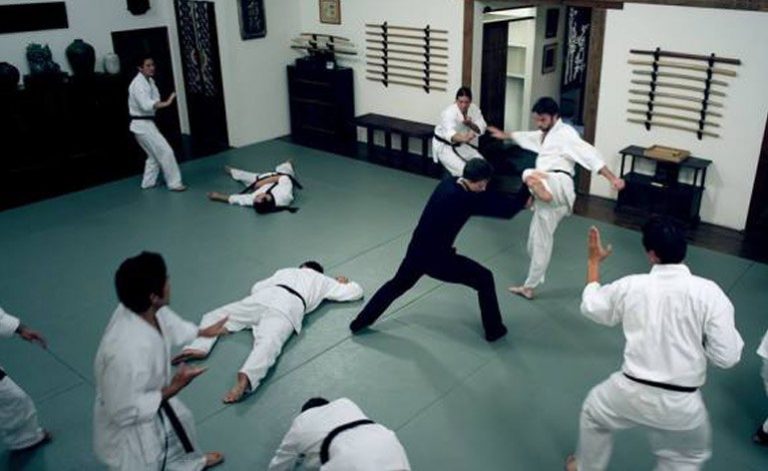 Die Fighting is a refreshing twist on the found footage genre with bad ass martial arts scenes and an unpredictable story.

Plot: When a team of Shaolin-trained kung fu actors is about to get their break in Hollywood, a mysterious and sadistic Director forces them to run a gauntlet through Los Angeles. The Director films their every move as they prove their prowess by provoking a rogues’ gallery of underworld thugs and martial artists.

Review: Previously known as The Price of Success, Die Fighting took a while to get here but it has certainly been worth the wait. If you’ve been looking for a movie with jaw-dropping fight scenes that isn’t The Raid then this is going to blow you away. I have to admit that the martial arts in this movie were incredible and the fight scenes were a true adrenaline rush of action.

The characters all use their real life names, so our lead Fabien is played by Fabien Garcia who is one of the best martial artists I’ve seen on screen in years. The supporting cast are also incredibly skilled but this feels very much like the Fabien show.

I knew there was going to be a twist coming at the end but I didn’t predict how it was going to happen at all. It does stretch creditability by the very end a little but it’s so well executed that I was just swept up in it all.

I want to go into the action highlights as there are almost too many outstanding fight scenes to choose from; my personal favourite has to be the Drunken Boxing scene with Fabien taking on a group of thugs using the Hong Kong drunken style, which just looked amazing and I could watch it on repeat. The scene where he takes on an entire dojo is incredible as well.

I’m not normally a fan of found footage films as the gimmick has long since gotten old but thankfully Die Fighting is done in such a way that it totally works. There is no shaky cam like there usually is in this genre and we really feel like we are watching real fights.

Overall, Die Fighting is a refreshing twist on the found footage genre with bad ass martial arts scenes and an unpredictable story. If you like fight movies then you should probably pick this up ASAP.