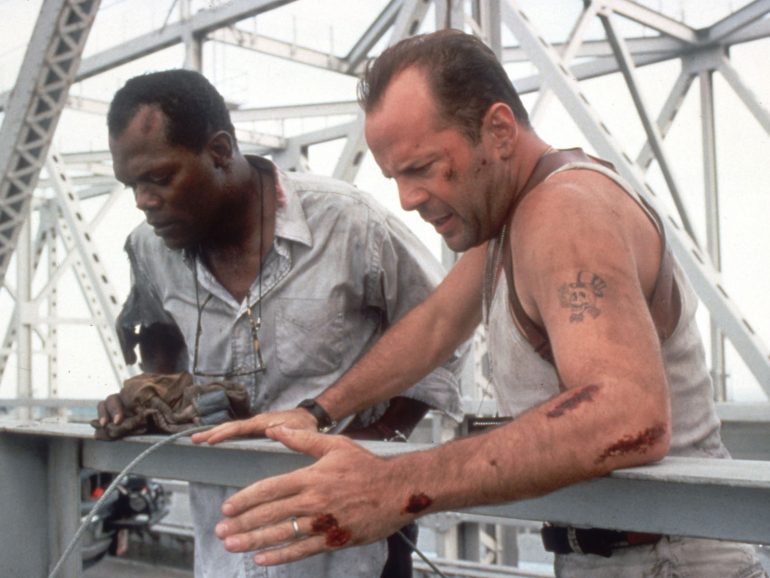 Die Hard With a Vengeance is an absolute blast with an excellent script with Samuel L. Jackson and Bruce Willis on career best form. Bring back McTiernan for Part 6 please.

Plot: John McClane and a Harlem store owner are targeted by German terrorist Simon Gruber in New York City, where he plans to rob the Federal Reserve Building.

Review: And so we come to my personal favourite of the Die Hard sequels and this one arguably has my favourite script of the entire series. The banter between McClane (Willis) and Zeus (Samuel L. Jackson) is some of the best buddy dialogue of all time.

The constant shouting, swearing and tension between them is fantastic from the very start. The script in general just shines and my personal favourite scene is McClane approaching two bad guys: “Hi, fellas. Mickey O’Brien, aqueduct security. Hey, listen, we got a report of a guy coming through here with, uh, eight reindeer.

Yeah, they said he was a jolly, old, fat guy with a snowy, white beard. Cute little red and white suit. I’m surprised you didn’t see him.”

I’ve always said that Die Hard is best when directed by McTiernan and aside from the fact that he understands McClane so well I love the fact that he just puts McClane through absolute hell. By the end of the movie he is literally dripping with blood.

McClane is at his brutal best beating bad guys to death with a door, shooting a bunch of goons in an elevator and then heroically shooting an unarmed man who says “don’t shoot!”…umm.

The movie opens with a spectacular explosion and doesn’t really let up until the end credits. The action is utterly insane with moments like McClane surfing on a truck and climbing off a bridge onto a ship far below, being the most ridiculously entertaining moments.

It does has plenty of flaws and yet they aren’t enough to dull my enjoyment; so let’s get them out of the way now. As much as I like Simon Gruber, played by Jeremy Irons I actually find that he’s maybe too likable. He isn’t quite as evil as his late brother so you aren’t really all that bothered if he gets away at the end. As he himself says “I’m a soldier, not a monster.”

The overuse of the “When Johnny Comes Marching Home” during the big heist really gets annoying after a while and in general the score doesn’t bring anything all that new to the movie. According to Filmtracks, apparently Michael Kamen’s original score was rejected by director McTiernan, who would instead choose to use material from the first two films to fill the gaps in between the non-original placements.

I also think this one may have the most underwhelming finale; it just lacks the excitement of the first two, but the top notch script makes up for it.

Like I said, none of these things are enough to ruin the movie for me and it’s the one movie of the series I’ve watched the most. For me, this is where the series should have ended because it’s the last film where McClane is “cool”. But I’ll get to that with the next review…

Overall, Die Hard With a Vengeance is an absolute blast with an excellent script with Samuel L. Jackson and Bruce Willis on career best form. Bring back McTiernan for Part 6 please.