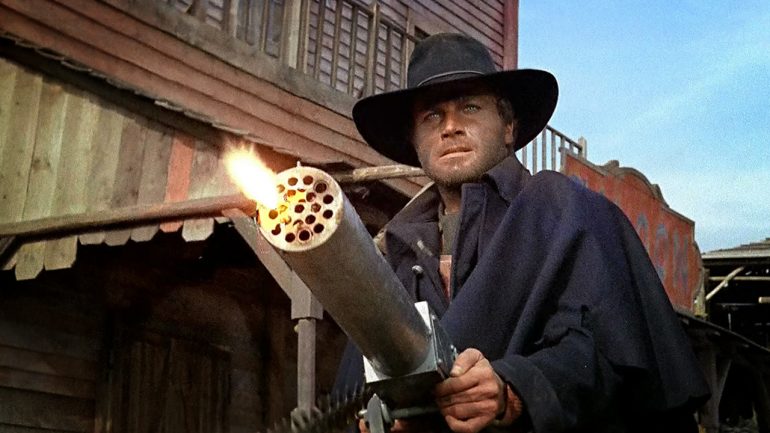 Django is not only one of my favourite films of all-time but this Blu-ray is one of the best on the market; Blue Underground clearly love these films as much as we do and I’m thankful that they are around to bring us these classic films on the ultimate format.

Plot: Franco Nero (KEOMA, DIE HARD 2) stars as the lone stranger who roams the West dragging a coffin filled with chaos towards a destiny ruled by vengeance. Co-writer/director Sergio Corbucci (THE GREAT SILENCE, COMPANEROS) packs his landmark classic with indelible images, unforgettable performances and some of the most shocking brutality of any ‘Spaghetti Western’ ever made. This is the still-controversial epic that defined a genre, launched a phenomenon and inspired over 50 unofficial sequels. This is the one and only DJANGO!

This definitive edition of DJANGO has been newly transferred in glorious High Definition from its camera negative, and includes the original Italian audio track featuring Franco Nero’s own voice. Following extensive restoration work, Blue Underground is now proud to present the most stunning and complete version of DJANGO you will ever see!

Review: I can officially say the Django may well be my all-time favourite Spaghetti Western; Franco Nero is one of the coolest men on the planet and it’s no wonder Django became such an icon. He is a man of few words like all the best Western heroes, but he has a good heart and won’t allow women to be harmed. As soon as he appears on screen you are on his side as he is immediately badass but we know he will also have an interesting past.

When we first see him he is walking around the old West dragging a coffin behind him. It’s a surreal vision and you’re wondering why on Earth would he be carrying that with him? The moment when we find out what is inside may well be one of the greatest moments in Western history. I’m not going to say what it is and spoil it but if you haven’t seen Django and are a fan of the genre then you’re going to love it.

The story is unpredictable and you have no idea which way it’s leading but it’s also surprisingly brutal especially a scene where someone has their ear cut off and then force fed it.

The music, the hateful villains and the hilariously huge bodycount will stick in your mind long after watching and this stunning new Blu-ray from Blue Underground is a must-have. The picture and sound have been beautifully restored and the film is in its original Italian language format.

There are some fantastic special features too which are listed below:

I particularly enjoyed the 10 minute short film The Last Pistolero which at first you aren’t quite sure what the Hell is going on but by the end it’s incredibly clever and yet sad too. The behind the scenes documentary about the Spaghetti Western genre is a little cheesy by today’s standards but it’s great to see interviews with the likes of Enzo Castellari who discusses his love for action.

Overall, Django is not only one of my favourite films of all-time but this Blu-ray is one of the best on the market; Blue Underground clearly love these films as much as we do and I’m thankful that they are around to bring us these classic films on the ultimate format.