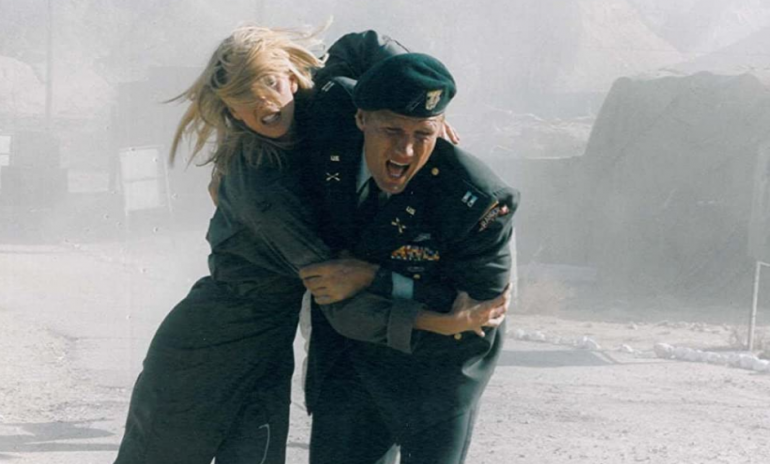 Dolph Lundgren is The Last Warrior (2000)

Plot: An earthquake measuring 9.5 on the Richter Scale splits California into an island with a perpetual dustcloud hanging over it. The survivors of the terrible ordeal have started to come together in the shape of Nick Preston (Dolph Lundgren) an air force captain, and other fractions of the military, including Sarah McBride and Lucky Simcoe, and have situated themselves in a warfare junkyard, holding weaponry from forgotten conflicts. They are searching for food, fuel and fellow survivors, and a possible path into the next world, while also dodging a violent plague that causes the skin to boil.

I would love to know what happened behind the scenes on this movie as it’s definitely a strange beast. Any movie with Dolph Lundgren is worth a watch and he elevates the material the best he can but The Last Warrior AKA The Last Patrol is still a rather dull affair.

After an impressive opening where we get to see an earthquake ravage the world there is then no action for at least another hour and it’s only really the last 15 minutes where we get a few (admittedly impressive) explosions but by then it’s too late as I imagine most viewers will have long since tuned out by then.

Directed by Sheldon Lettich (Lionheart) I was reading on IMDb that he and Dolph “agreed to make the film with the producer’s promise that the script would be re-written, which was not allowed by the writers, who were also the co-producers”. This might explain they the film is disjointed and lacking anything truly memorable.

I only just now finished watching it for the first time as when I tried before I turned it off after 20 minutes. It just lacked urgency and it needed some more action (or ANY action at all) to keep things moving but it still feels like a rather long 90 minutes.

What was the point of the milkman with the goats? He just disappears and I figured he was going to have more significance to the plot (or lack thereof).

I feel like there could have been an interesting movie in here somewhere but what we got is tedious and none of the characters are appealing aside from Lundgren. I found McBride mostly annoying and never really rooted for her with the rest of the cast one note and forgettable.

Overall, The Last Warrior/ The Last Patrol is best left alone as it’s one of Dolph’s weakest movies. It sounds like there was a lot of behind-the-scenes stuff that went on which I would love to hear about if anyone knows but as it is this movie is sadly one to avoid.