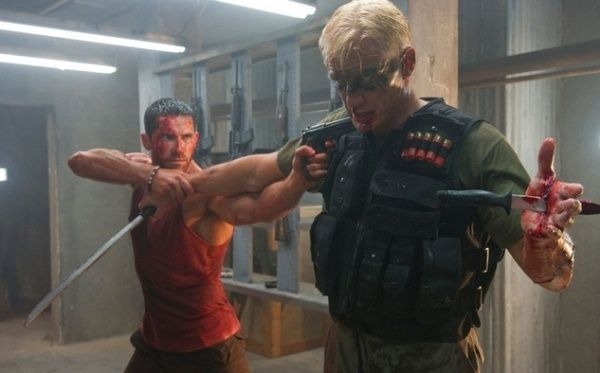 Dolph Lundgren and Scott Adkins clearly get on with each other as they are teaming up yet again for actioner Castle Falls which Dolph will also direct.

According to THR “The film, set to go into production mid-March in Alabama, sees Adkins play Mike, a struggling fighter forced to take on a foreman job at a local condominium that is set to be demolished. With just eight hours before the building, strapped with dynamite, is destroyed, two vicious local gangs, one led by Lundgren’s character, Shea, break in to retrieve millions of dollars stowed away in one of the apartments. When Mike stumbles across the money, a game of cat and mouse ensues.

“This combo with action stars Dolph Lundgren and Scott Adkins is just what the buyers are looking for, and we are excited to be working with Dolph again,” said VMI CEO Andre Relis, who is due to produce alongside Lundgren’s longtime manager Craig Baumgarten of Wonder Street.

“Great to be back directing again. Looking forward to working with Scott Adkins for the fourth time,” said Lundgren. “Excited to produce with my old friend Craig Baumgarten. Castle Falls is an entertaining script with hardcore action, great characters and an emotional center of transformation and compassion.”

Added Baumgarten: “It is exciting to produce this wonderful script with two great actors, amazing action stars and longtime friends, Dolph and Scott. We have collaborated successfully on several other films in the past and can’t wait to do it again.”