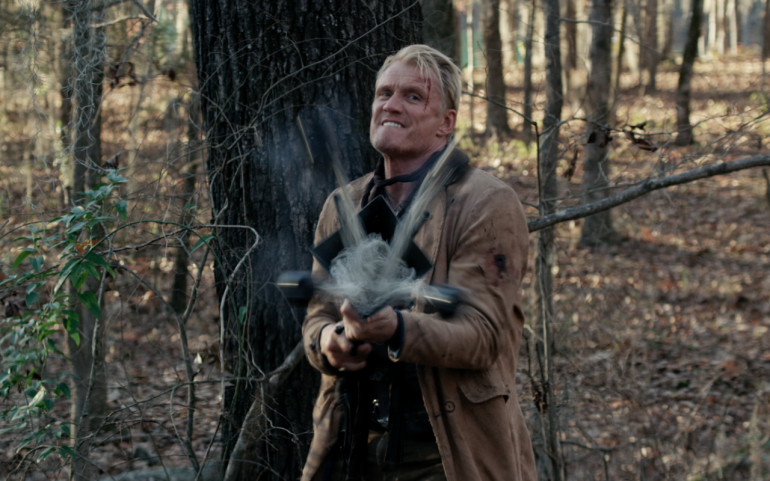 Don’t Kill It is a hugely entertaining action/horror/comedy hybrid with some fantastic kills, real blood squibs and one of Dolph’s best characters in years.

Plot: An ancient evil is unleashed in a small Alaskan town leaving a trail of death and destruction as it passes from host to host. The only hope of survival lies with a grizzled demon hunter (Lundgren) who has faced this terror before. Together with a reluctant FBI agent (Kristina Klebe) he has to figure out how to destroy a demon with the ability to possess its killer

Review: The trailers to Don’t Kill It looked like something a little different from the usual Dolph Lundgren fare and they were right. It’s a blend of horror, action and comedy and is arguably one of the best movies Dolph has done in years. It has a massive bodycount with some fantastically imaginative gore, including a massacre at a town hall meeting which was reminiscent of the church scene from Kingsman.

The best thing? Squibs! It seems filmmakers are finally getting back to using blood squibs again rather than that horrible CG bullshit so there is blood galore in this movie. You’ve got axes in heads, stabbings, shootings and many more imaginative deaths which are at first very shocking but as the film goes along you’re just laughing with it. The first 10 minutes are surprisingly disturbing as you’re wondering what the Hell is happening but it soon makes sense and the brief runtime makes sure you won’t be bored for a second.

It doesn’t take itself seriously with plenty of black humour and it kind of feels like an extended episode of Supernatural crossed with Denzel Washington’s Fallen.

Dolph has rarely been cooler with a twinkle in the eye right from the start and the concept for the story is quite bonkers. There isn’t much to it though and it’s pretty straightforward in terms of plot so there are no surprises but I still thought it was a blast.

Overall, Don’t Kill It is a hugely entertaining action/horror/comedy hybrid with some fantastic kills, real blood squibs and one of Dolph’s best characters in years. I think it’s destined to become a cult classic.