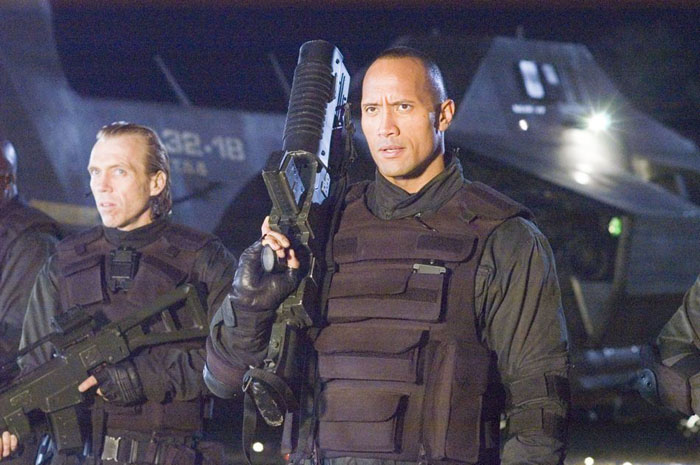 Doom is rather forgettable fare and feels very much like Aliens/Predator, but the great cast and action scenes make it extremely enjoyable and worth a watch.

Plot: Space Marines are sent to investigate strange events at a research facility on Mars but find themselves at the mercy of genetically enhanced killing machines.

Review: Doom is a movie that very few people still talk about; it was quickly forgotten and I think unfairly so. It’s one of the few decent video game adaptations and deserves a second watch. It’s by no means an amazing movie and it’s rather forgettable, but it’s confidently directed with some impressive visuals.

The set design has a really claustrophobic feel to it and the whole movie is very reminiscent of Aliens, with a little bit Predator added for good measure. There’s even a character called Mac.

The cast is awesome featuring Dwayne “The Rock” Johnson and Karl Urban; in this Dwayne Johnson gets to play a villain. He starts off as a good guy but slowly descends into madness and he has an awesome climactic fight with Karl Urban.

Both actors give great performances and make it feel authentic and believable despite the high concept. Urban is really the only likable character and the one who has any character development. The rest of the marines are essentially just expendable grunts; you’re literally looking at your watch waiting for them to get picked off one by one.

The visual effects are also excellent with minimal CGI and more prosthetics/make up which ALWAYS looks better. It also has some pretty nifty gore sequences with awesome looking monsters.

Admittedly it’s not as tense as it could be and it takes a little while for anything to really happen, but when it does kick off, it’s pretty awesome. I love the FPS action sequence towards the end which is fantastically executed. Some of the movie is a little too darkly lit though and it’s difficult to make out what’s going on, but most it is fine.

The music is thumping electric guitar mixed with orchestra and works well in the action scenes and the quieter moments to help build some tension.

Overall, Doom is rather forgettable fare and feels very much like Aliens/Predator, but the great cast and action scenes make it extremely enjoyable and worth a watch.