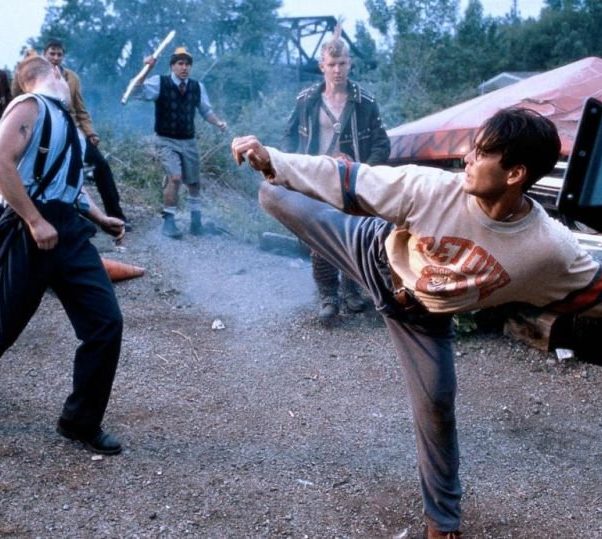 I’m actually old enough that I used to play the videogame Double Dragon on my Commodore 64 growing up; “what the hell is a Commodore 64?” I hear you say. Well, gather round children and I shall tell you a tale; it was one of the earliest home computers and playing a game required almost inhuman patience as you waited 45 minutes for a game to load only to crash the majority of time and be met by many expletives. But I digress, let’s talk Double Dragon…

We all know that Double Dragon from 1994 isn’t a great film by any stretch of the imagination but by God is it a lot of cheesy fun. It stars Mark Dacascos and Scott Wolf as the two videogame characters Billy and Jimmy Lee who have half of a powerful ancient Chinese talisman. An evil gang leader (Robert Patrick) has the other half, and determines to get the brothers’ half and have a complete medallion so he can gain absolute power.

Let me just say that Robert Patrick just owns this movie and treats it like the drunken party it’s meant to be. He is clearly loving every second hamming it up as the villain and not taking it seriously at all. But that’s the trick with the whole movie; it’s meant to be bad and has a light tone throughout. With it’s mock news reports and commercials it has a nice nod to RoboCop but we also have the Channel 69 News (hehehe).

Dacascos and Wolf know what kind of movie they are in too and just go with what really is a live action cartoon… or indeed videogame. Surprisingly there is plenty of action and Dacascos gets to show off his fighting skills in many of the bloodless battles. Make no mistake this is a kid’s film and you may blush quite regularly watching it by just how lame it is but it’s so gloriously 90’s with the fashion, haircuts and music only adding to the entertainment value. There are a few subtle adult oriented jokes but they are few and far between.

The supporting cast also includes one Al Leong who is cast as the henchman and even has an in-joke about it at the end. Alyssa Milano provides the babe factor who both brothers ogle throughout the film which you certainly wouldn’t get away with today.

Double Dragon brings back lots of fond memories of a bygone era for me and if you watched it for the first time now you would probably wet your pants with laughter; it was never seen as good movie and never will be but it sure is a helluva lot of fun. Make sure you are inebriated before watching for best results.