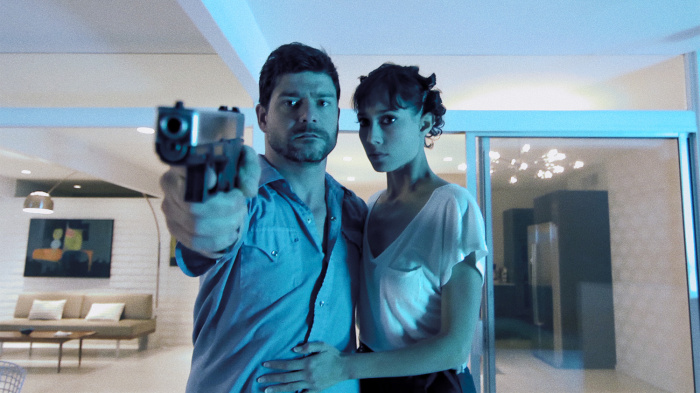 Down and Dangerous is slick and stylish and if you’re looking for an indie action thriller, then you should give it a shot.

Plot: Always one step ahead of the Feds, Paul Boxer is the most inventive and principled smuggler in the trade, and has never needed to carry a gun. When violent mid-level traffickers coerce him into designing a foolproof plan to bring several kilos of cocaine across the México border, he manoeuvres to rid himself of their hold over him once and for all. But when a sharp-witted woman from his past enlists his help to escape this rival outfit, Paul must confront the man that is hunting him down, and choose between his livelihood as a smuggler and his integrity as a man.

Review: From the trailers, you’d think Down and Dangerous was going to be a similar kind of movie to Ryan Gosling’s Drive. I suppose in terms of style there are similarities; the rather excellent 80’s style synth score being the stand out. The music is my favourite aspect of the movie and it really created a cool atmosphere for the story.

It’s also incredibly stylish and beautifully shot; rather than being dark and gritty, it’s nicely lit and has an almost dreamlike aspect to it.

John T. Woods is the protagonist and I see him having a long career; he has a very likable face and also has some impressive fighting moves too. His character Paul is extremely cool and never really loses it, no matter how desperate things look.

Paulie Rojas is the love interest and you aren’t sure whether she can be trusted or not; she’s a lovely looking girl and brings a nice piece of heart to the story too.

Ross Marquand almost steals the movie as Henry, the corrupt cop who has done a lot of bad deeds. The interesting thing is, you don’t totally hate him nor do you hate the main drug dealer. They aren’t portrayed as monsters, just men trying to make their way.

Interestingly enough, the story was apparently inspired by director Zak Forsman’s father’s brief career in the cocaine trade, which is why it feels very believable and authentic. The script was unpredictable and the acting was top notch.

There isn’t all that much action and it’s arguably more of a character piece, but it has enough tension to keep you glued until the finale.

Overall, Down and Dangerous is slick and stylish and if you’re looking for an indie action thriller, then you should give it a shot.