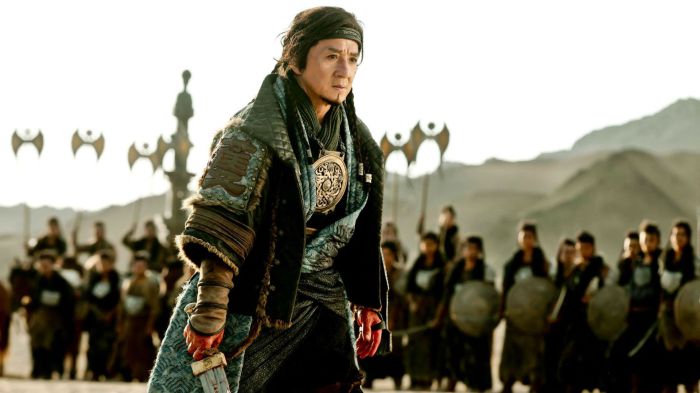 Dragon Blade isn’t without its flaws and if you’re looking for lots of fight scenes then you’ll be disappointed, but I’d be lying if I said I didn’t love every second of it. It’s one of my favourite Chan movies and will be on my top 10 for 2015.

Review: There is very little in the way of Jackie Chan’s trademark slapstick humour in Dragon Blade but what we do get is a genuinely epic story with stunning battle scenes and characters that we care about. The action is mostly sword-fights and Chan does little in the way of martial arts, but as the man is getting older it’s nice to see him try something so different.

I remember Mel Gibson was supposed to be in this originally and I imagine it would have been in the John Cusack role; that would have been better but Cusack actually does OK as fugitive Roman Lucius.

The story is quite complicated so I’m not going to go into every twist and turn but it was pleasingly unpredictable and went in directions I didn’t expect. Chan gives an almost career best performance as Huo An. He starts off as a Silk Road Protector who is wrongly convicted of a crime and that’s when the story really begins.

When Lucius shows up with his exhausted army, Huo An allows them access to their city and what should be a clash of cultures becomes a friendship.

Adrien Brody hams it up wonderfully as Tiberius and although he’s not about to win an Oscar for it, this really is a fantastic villain role.

Yes, the American accents are out of place but as it’s a story of different cultures working together to overcome a common threat then it didn’t really bother me.

I was thoroughly engaged with the story from beginning to end and I especially like the relationship between Lucius and Publius – The Roman Prince (Jozef Waite). Lucius will do everything in his power to protect the child and when Tiberius reappears, things quickly go downhill for them.

The music score has large choirs and even some Opera thrown in for good measure; there is admittedly some unintentional humour where it reminded me of Airplane but in general I really enjoyed it.

There is some CG in it too but nothing jarring and it gave the film a nice sheen to it as well; a scene towards the end was lifted pretty much from Lord of the Rings and when you see the film you’ll  know exactly what I’m talking about.

Overall, Dragon Blade isn’t without its flaws and if you’re looking for lots of fight scenes then you’ll be disappointed, but I’d be lying if I said I didn’t love every second of it. It’s one of my favourite Chan movies and will be on my top 10 for 2015.