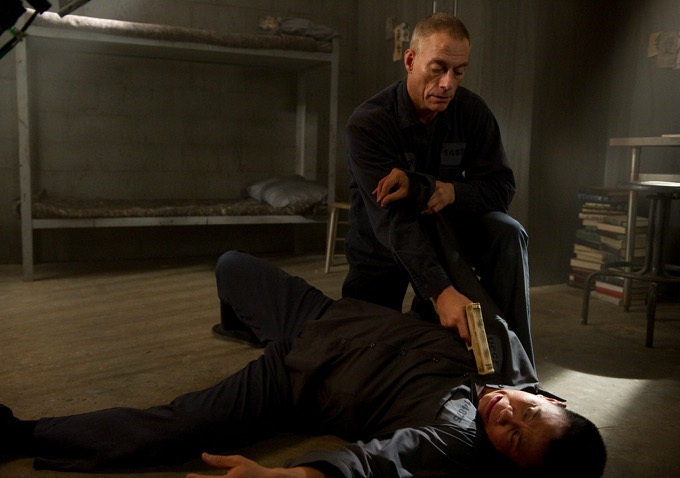 Plot: In St. Jude, drug dealers and corrupt cops have destroyed an urban neighborhood. But newcomer, Hong, has the fighting skills and moral vision to save this town from itself.

Review: Dragon Eyes was part of last year’s After Dark Action Movies and although it wasn’t my favourite of the bunch, it was still good fun. Jean-Claude Van Damme only has a small (but pivotal) role in the movie, so if you’re looking for a JCVD movie then you’ll be disappointed.

No, the main protagonist of this flick is UFC Fighter Cung Le who goes all “Man With No Name” on a small town called St. Jude.

Le does the mysterious stranger role well and has some pretty awesome fight scenes but the movie is completely stolen from him by Peter Weller as the villainous Mister V. Any time he’s on screen, he just chews the scenery, in the best way possible. He’s pretty viscous too and has some interesting methods of interrogation.

You’ve also got a decent role for Kris Van Damme as a corrupt cop and it’s good to see him carving a name for himself too.

As previously mentioned, I must say that the first time I watched the film, I was disappointed as it was advertised as essentially being a Van Damme movie and he’s literally only in it for 5-10 minutes. He’s more of a mentor in it but still has a couple of fights; you can tell in the brief moments he’s on screen that he had a good rapport with Le in real life.

The film has an almost dreamlike quality to it and is quite surreal in places; like the two crackheads in the apartment. That was a particularly bizarre scene and stuck with me after watching it. Not sure why… it just did.

The story isn’t particularly original but it did the job and the movie is essentially a vehicle for giving us Le as the next big action star.

It doesn’t skimp on action and is well paced too; there’s plenty of violence so you won’t be let down there.

Overall, although not a classic film, Dragon Eyes is still entertaining but it needed more JCVD.