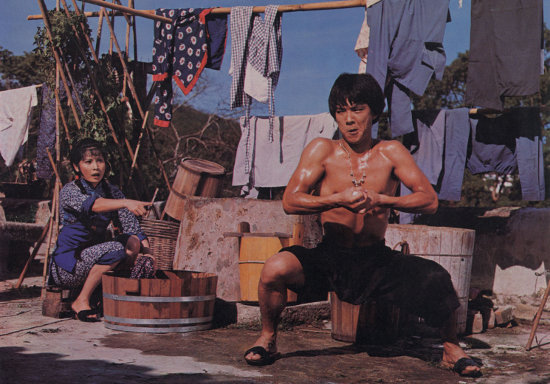 Plot: A short-tempered, violent criminal named “White Tiger” is on the run from the police and joins a theater troupe for disguise, killing anyone who angers him or who suspects his identity. One person he unsuccessfully tries to kill several times is a cowardly laundry man named “Mousy” who manages to escape mostly by running and hiding. When a very close friend of Mousy’s is killed by the White Tiger, Mousy overcomes his cowardliness enough to seek revenge. Spectacular martial arts and acrobatics highlight the film, including a well choreographed fight between two pairs of men in dragon costume.

Review: This is a rather iconic martial arts flick which is also extremely influential. Strangely enough it was especially an influence on Batman Forever. Remember the scene where Robin does the washing in front of Alfred and he uses martial arts moves to dry his clothes? That was a reference to a scene in this very movie… this movie is better of course.

Dreadnaught is actually a martial arts comedy and although some of the slapstick gets annoying after a while, the martial arts on display are breathtaking.What do you expect when it’s choreographed and directed by Master Yuen Woo Ping after all?

It must have taken ages to choreograph everything and I found myself swept up in it all. I was laughing with it rather than at it and it was great fun. Yuen Biao is in pure comedic form as the cowardly Mousy who has to be the most unrealistically cowardly character I’ve ever seen, but that’s part of the fun. It all plays like pure theatre and it’s difficult not to love it. Whenever Mousy finds his courage at the end and unleashes his skills the final fight is fantastic.

The music is a bit annoying in places and the scene with the two dragon things is well done but it goes on for too long.

Overall, Dreadnought may be in my top martial arts flicks; just old-fashioned cheesy, martial arts fun and definitely worth checking out.